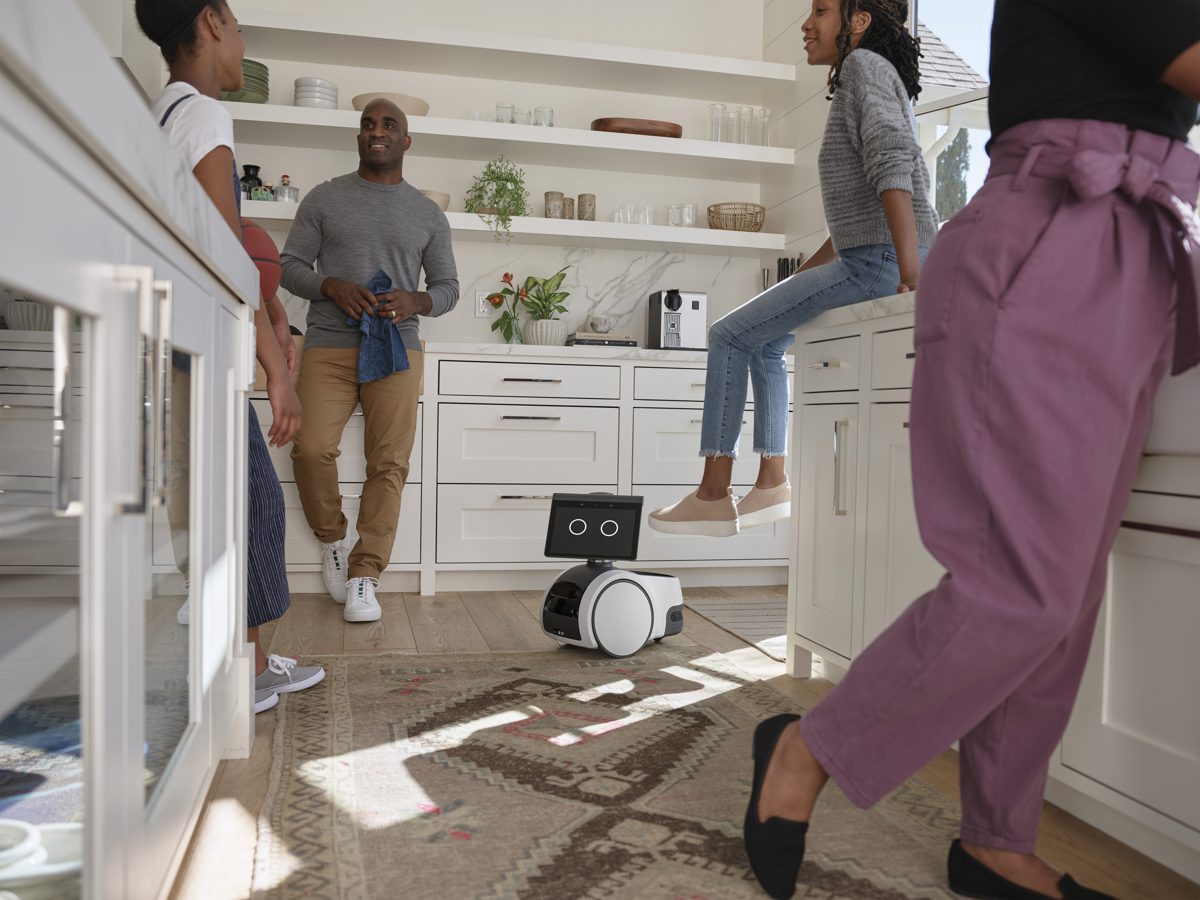 Amazon’s Echo and Ring product lines have been steadily creeping into our homes for years now, watching and listening to our every move as we occasionally ask them to turn on some music or give us a weather forecast. It’s only going to get weirder from here.

On Tuesday, Amazon held a livestream for press to show off its latest hardware products. They run the gamut from normal and convenient to bizarre and even straight up creepy. Here’s everything Amazon showed off on Tuesday.

The most straightforward and simple of Amazon’s new products has a no-frills name: Smart Thermostat. It’s called that because it’s a smart thermostat. Sometimes they make things nice and easy.

To be fair, there is a little more to this Nest competitor. It’s $59 and was made in partnership with Honeywell. It’s fully Alexa-compatible, so you can command it with other Alexa devices and its AI has a “Hunches” feature that will adjust the temperature of your home’s HVAC system based on what it thinks you want.

Other than that, it’s pretty much a thermostat.

Ring Alarm Pro is a $249 security camera system that records videos just like older Ring devices, but this time you get the benefit of local storage for those videos instead of relying purely on the cloud. Beyond that, it’s also got an Eero WiFi 6 router built in, so you can make the internet in your house better while also beefing up security. It’s an odd mix, but one that might be enticing to some folks.

Amazon’s Blink subsidiary has made cheap security cameras for a while, but it’s never ventured into the video doorbell space until now. The Blink Video Doorbell is exactly what it sounds like: A doorbell that you can use to peep whoever is on your doorstep. It costs $49 and runs on two AA batteries that can supposedly last up to two years.

That’s pretty cheap for the ability to see a 1080p live feed of your guests, and even speak to them using a two-way microphone setup. That feature works through a mobile app, so you can see your visitors while you’re out and apologize for not being able to open the door for them.

One of the only other relatively normal things Amazon showed off is the new Echo Show 15. It’s the latest Echo speaker to come with a tablet interface instead of merely being a little pod that you talk to, and it gets its name from its relatively large 15.6-inch 1080p display. It’ll retail for $249 when it launches later this year.

Echo Show 15 is being positioned as more of an entertainment device than some of its predecessors, with support for major streaming services like Prime Video, Netflix, and Hulu, alongside newcomer Sling for live TV. It looks more like a picture frame than other Echo Shows, and can either sit on a flat surface or be mounted to a wall.

The new user interface lets multiple people within a household opt into a feature that creates custom layouts that activate when the Echo Show 15 detects their faces through the camera using a feature called “Visual ID.” Your specially curated display can feature recipes, shopping lists, picture-in-picture feeds from Ring cameras, and even leave sticky notes for other people in the house to see later.

Halo View retails at $79 and will be compatible with “fitness content” from brands like Halle Berry’s rē•spin, which you can access from the Halo app. Users can also craft shopping lists for their healthy meal plans. Many of these features are locked behind a $3.99/mo Amazon Fitness subscription, but you get a free year of that with your purchase of a Halo View.

Of course, it can also track your sleep like other fitness bands. Fair warning: This is the last of the relatively normal things Amazon presented. Proceed forward at your own risk.

The last couple of years have seen plenty of grasping for better ways to teach and play with kids remotely. Amazon Glow is certainly a way to do that, if nothing else.

Essentially, Glow is a $299 (or $249 if you get into the invite-only early access program) video call device with a vertically oriented 8-inch screen. At the top of the screen is a projector that blasts an image down onto a flat surface in front of the device, creating an 18-inch, touch-sensitive play area that kids can use to play checkers, draw pictures, put together jigsaw puzzles, and more with an adult on the other end of the line. Thankfully, said adult doesn’t need to have a Glow device of their own, as they can use a free tablet app to play their role.

If you’ve ever wondered what would happen if a Ring camera could fly, Amazon is in your corner. One of the products Amazon showed off on Tuesday is the Ring Always Home Camera, essentially a drone that will cost $249 for those who manage to get one off a pre-release waiting list.

To be fair, we’ve known Amazon was making a drone since last year, so this one isn’t shocking. It lives inside a little charging dock, and will lift off to run pre-planned little flightpaths around your house, livestreaming the entire time. The camera is covered when the drone is in the dock, but when it’s active, it’s getting a bird’s eye view of every nook and cranny of your home.

Believe it or not, this isn’t the creepiest mobile surveillance device Amazon showed off.

Oh boy, here we go: Amazon made a robot.

Astro is a $1,499 (or $999 for early access buyers) camera-on-wheels that can roam around your house and do everything from facilitating video calls on its tablet screen to sending intruder alerts to owners when they’re not home. Amazon says it has a bunch of safeguards to keep it from doing things like falling down stairs or running into pets, and you can set parameters to prevent it from entering parts of your house you’d rather not have a surveillance robot in.

The worst part is that the tablet has a pair of eyes to give it a personality. That’s too far.

And there you have it. Pretty much everything Amazon announced on Tuesday is a new way to film or record what’s going on in your home, whether that’s someone in a kitchen working on a new recipe or a little kid playing Go Fish with a grandparent halfway across the country. At least Amazon is consistent in its desire to surveil.