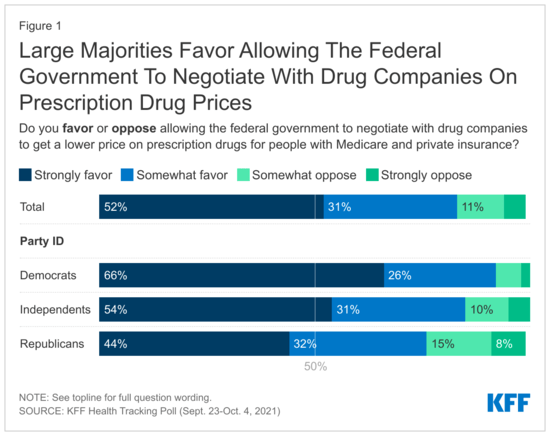 Case in point: Sinema. Now, this next bit is from Politico (or as wag Charlie Pierce has pegged it, Tiger Beat on the Potomac), so grain of salt and all that. “I’m not going to share with you or with Schumer or with Pelosi,” Sinema reportedly told a fellow senator. “I have already told the White House what I am willing to do and what I’m not willing to do. I’m not mysterious. It’s not that I can’t make up my mind. I communicated it to them in detail. They just don’t like what they’re hearing.” That’s on the heels of a CNN report that Biden has told lawmakers that Sinema won’t even return his phone calls, so yeah, pretty believable.

The one thing Sinema has made clear is that she is opposed to prescription drug pricing reforms. That’s something very large majorities of voters support, looking at the latest health tracking survey from the Kaiser Family Foundation: “large majorities support allowing the federal government to negotiate and this support holds steady even after the public is provided the arguments being presented by parties on both sides of the legislative debate (83% total, 95% of Democrats, 82% of independents, and 71% of Republicans).”

This year, a previous KFF survey found that reining in prescription drug prices is the number-one priority voters want Congress to tackle in health reform. This might just be the most popular of all of the things in the Build Back Better reconciliation bill. And Sinema opposes it.

That’s how Democrats want to cover the costs of expanding Medicare to cover hearing, dental, and vision care. Which, KFF finds, 90% of the public thinks should be a “top” or “important” priority for Congress. That’s because almost all seniors need those services, and because this coverage outside of Medicare is prohibitively expensive for many of them. According to KFF, “close to half (44%, or 25.9 million) of beneficiaries reporting difficulty hearing and more than one third (35% or 20.2 million beneficiaries) reporting difficulty seeing in 2019.” Those who can afford that care are paying a lot for it.

So what’s Sinema’s problem with it? Probably because she’s a “Pharma favorite.” She is “a leading recipient of pharma campaign cash even though she’s not up for reelection until 2024 and lacks major committee or subcommittee leadership posts.” She’s raked in more than $750,000 from the pharmaceutical and medical device industries, even without having the positions in the Senate to directly influence policies. What she has the power and chutzpah to do is stop Democrats from doing anything to curtail those industries’ profits. Even to help millions of people.

The industries haven’t just bankrolled her personally; they’re funding dark money groups that are boosting her. One group, Center Forward, has been running ads for Sinema this fall. It has received at least $4.5 million from Pharma. There are at least two pharma lobbyists on the organization’s board. Center Forward also sent out this mailer to Arizona voters, lauding her as an “independent voice for Arizona’s economy.” Maybe, if Arizona’s economy is dependent on the pharmaceutical industry. Because she’s sure as hell not doing much for the people there.

Not for nothing, Sinema also happens to be the number-one recipient of cash from an industry that might be even more evil than pharma: payday lenders. By a lot—like, tens of thousands more than any other member.

Whatever Sinema is about in the Senate, it is not looking out for Arizona. Well, maybe one Arizonan. What she’s doing there now is endangering all of our futures.