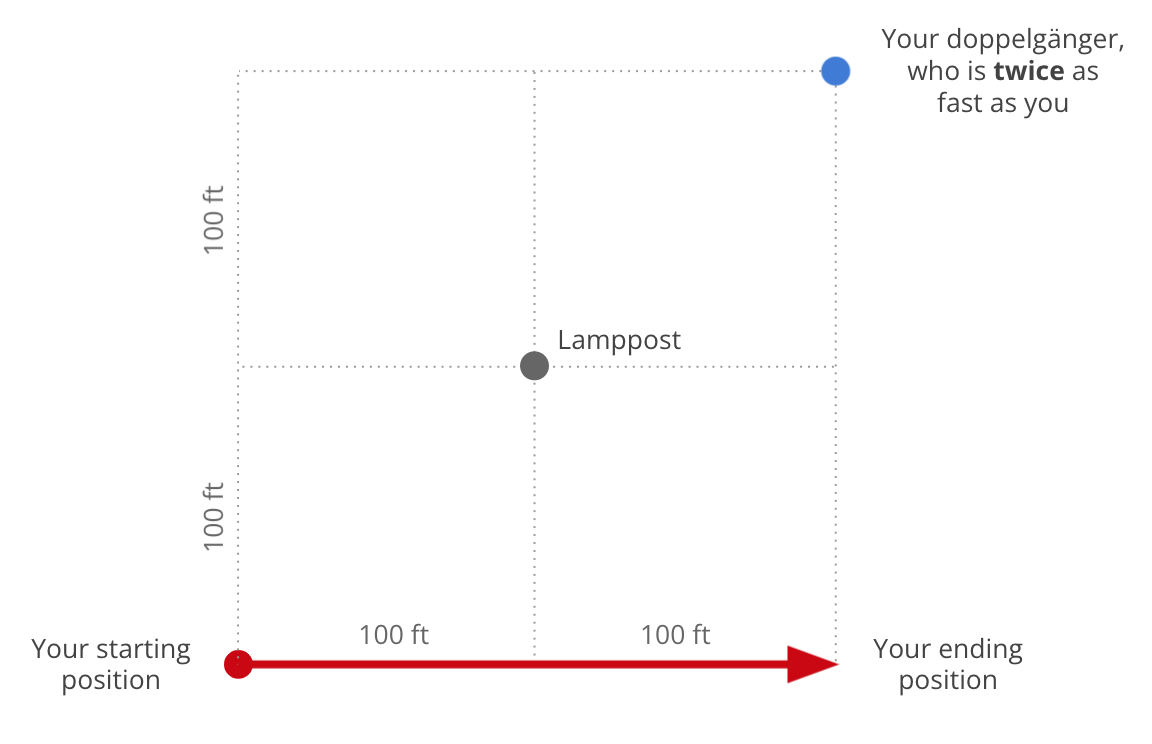 Welcome to The Riddler. Every week, I offer up problems related to the things we hold dear around here: math, logic and probability. Two puzzles are presented each week: the Riddler Express for those of you who want something bite-size and the Riddler Classic for those of you in the slow-puzzle movement. Submit a correct answer for either, and you may get a shoutout in the next column. Please wait until Monday to publicly share your answers! If you need a hint or have a favorite puzzle collecting dust in your attic, find me on Twitter.

From Quoc Tran comes a riddle that takes us back … to the future!

Channeling your inner Marty McFly, you travel one week back in time in an attempt to win the lottery. It’s worth $10 million, and each ticket costs a dollar. Note that if you win, your ticket purchase is not refunded. All of this sounds pretty great.

The problem is, you’re not alone. There are 10 other time travelers who also know the winning numbers. You know for a fact that each of them will buy exactly one lottery ticket. Now, according to the lottery’s rules, the prize is evenly split among all the winning tickets (i.e., not evenly among winning people). How many tickets should you buy to maximize your profits?

You are walking along a perfectly straight road one day. One hundred feet in front of you, and then another 100 feet to the left of the road, there is a lamppost (see the diagram below). You can’t be sure, but you briefly spot a doppelgänger on the other side of the lamppost, the same distance away. You look again, but now all you see is the lamppost. Perhaps your eyes were playing tricks on you.

Or perhaps your doppelgänger is now obscured by the lamppost. You start walking along the road, getting closer to the lamppost, but your doppelganger remains hidden. Feeling outmaneuvered, you suspect that your doppelgänger moves precisely twice as fast as you at all times. However, unlike you, they are not constrained to a straight road, and can move more freely in two dimensions.

You walk a total of 200 feet, so that the lamppost is now 100 feet back and 100 feet left of the road. Still no sign of the speedy doppelgänger, who is assuredly still obscured by the lamppost.

At this point, you contemplate chasing down the doppelgänger more directly. But before doing so, you wonder: What is the farthest the doppelgänger could be from the lamppost? (Again, assume they move precisely twice as fast as you at all times, and that they started symmetrically opposite from you.)

I had recently purchased a new Velo-ton stationary bike, which recorded three key metrics throughout each ride: cadence (how fast I was riding), resistance (how hard I had to push the pedals to keep moving) and output (the power I produced).

With a little experimentation, I determined that the power (in watts) was equal to the product of the cadence and resistance values divided by 20. For example, if my cadence was 64 and my resistance was 25, then my power output was (64·25)/20, or 80 watts.

At first, I figured my average power was (40·80)/20, or 160 watts. But I soon realized other values were also possible. What was the maximum average power that I could have produced?

That was a whole lot of functions to consider! Fortunately, since you knew f(t) and g(t) both averaged to zero, that meant you could ignore the two middle terms when computing the average power. So, all you had to do know was maximize 160 + f(t)·g(t)/20, which could be accomplished by maximizing f(t)·g(t).

What did this mean for my bike ride? Cadence and resistance were simultaneously low and then simultaneously high. To produce the minimum average power, I had to do the opposite — when cadence was high, resistance was low, and vice versa. In other words, the product f(t)·g(t) was always at its minimum value of -400, resulting in an average power of 140 watts.

So, despite precisely knowing the average cadence and resistance, my average power could have been anywhere from 140 watts to 180 watts.

Fortunately, there’s an easy way to maximize your power on a stationary bike: When the resistance gets tough, the tough get cadence! (Or something like that.)

Your task was to set an assignment schedule that lasted a certain number of weeks and then repeated indefinitely.

In the spirit of fairness, the rangers proposed the following conditions for the schedule:

What was the shortest possible repeating schedule that meets the rangers’ conditions?

Suppose the shortest schedule had a period of N weeks, and then repeated. Solver Sjoerd de Vries of Vandœuvre-lès-Nancy, France, realized a good first step was to figure out some conditions on N. According to the first condition, each ranger had to spend an equal number of weeks in the north and the south. This implied that N was even.

So, was it possible that N was six? Or did it have to be a larger number, like 12 or 18? To help sort this out, solver Jenny Mitchell looked at the last two conditions. The last condition said that two rangers moved each week, which meant there were a total of 12 moves in six weeks. And the third condition said that all rangers moved the same number of times. Dividing the 12 moves among four rangers would have meant each ranger moved three times — an odd number that would have failed to return them to their initial location. How could the schedule possibly repeat every six weeks if the rangers didn’t finish where they started?

Taking all four rules into account, N had to be a multiple of 12. Indeed, 12 weeks was the shortest repeating schedule that met all four conditions.

Solver Nick Harper assembled one such schedule. If the four rangers were A, B, C and D, then one possibly weekly schedule was:

There were other notable approaches as well. A few solvers, like Justin Ahmann and Matthew Walsh, looked for Eulerian circuits on graphs representing the park. Finally, solver Emily Boyajian used brute force and a little computer assistance, checking 412 different schedules. Among these, Emily found precisely 3,200 that met the rangers’ conditions.

Well, aren’t you lucky? There’s a whole book full of the best puzzles from this column and some never-before-seen head-scratchers. It’s called “The Riddler,” and it’s in stores now!

Want to submit a riddle?