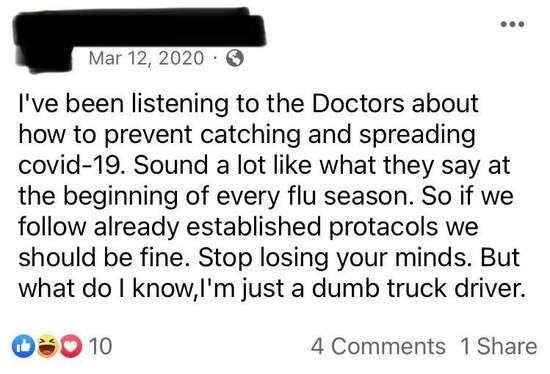 This series documents stories from the Herman Cain Awards subreddit, tracking the COVID mis- and disinformation on Facebook that is leading to so many deaths. Today’s cautionary tale almost got lucky.

At the very beginning, we had no idea how COVID spread. It really was a “do everything you can to sterilize everything around you and hope for the best” mentality. We did know the virus was terribly deadly, and hospitals in China were being overrun by the ill. There was plenty of reason to be worried. Would’ve been a good time for Trump to be an actual leader and help people understand how to best protect themselves. Instead, he could only think about how to protect himself.

I’m more scared of being eaten by a shark than I am of catching COVID, particularly since I’m triple vaxxed. But that doesn’t mean I stop being afraid of COVID. Shit doesn’t have to be so binary.

Other things that I fear more than COVID:

Gotta love this win-win attitude, huh? If Trump does well, it’s all because of him! If he fucks it all up, like he did, it’s everyone else’s fault.

That said, this applies 100% today. Republican governors are doing everything possible to undermine President Joe Biden’s efforts to end the pandemic, return to normalcy, and help those economically impacted. It’s no surprise that the worst per capita death rates are now almost exclusively red states.

So unbearably stupid I can’t even.

Maybe each of them, on their own, don’t prevent COVID, but all together, these mitigating practices can help arrest the spread of the virus.

I like how they pretend that their brand of stupid is somehow bipartisan.

The meme literally says REGISTERED sex offenders. They have to register. There is a website that lists their names and where they live. They have to knock on neighbors’ doors and announce themselves when they move anywhere.

And why would they carry a card? Before sitting down at a restaurant, are they supposed to ask, “By the way, do you have a registered sex offender card? We’re required to ask.” What a stupid stupid stupid meme.

This guy was so different than the rest. So many dig into their beliefs no matter how much they’re suffering from COVID. This guy got some body aches and he was like, “NEVER MIND ALL THAT OTHER SHIT, WHERE DO I JAB?”

At least he acknowledges that he fucked up. Again, very rare.

Not gonna lie, I was rooting for him at this point. Not just because I don’t like people dying of preventable diseases, and he was going to start taking those preventions, but because former anti-vaxxers have to be some of the most effective ambassadors for vaccination.

The effect on loved ones is always the worst. So terribly sad.

His last post. Look at how great he would’ve been promoting the vaccine. He was so eager and ready to do it!

Sad that he expected friends to hate and unfriend him over it, even as he fought for his life in the ICU.

I just think of what might’ve been had he pulled through, using his experience to “beg” (his words) everyone around him to vaccinate and boost. It would’ve saved lives. Instead, he leaves behind a bereaved family and so much untapped possibility.