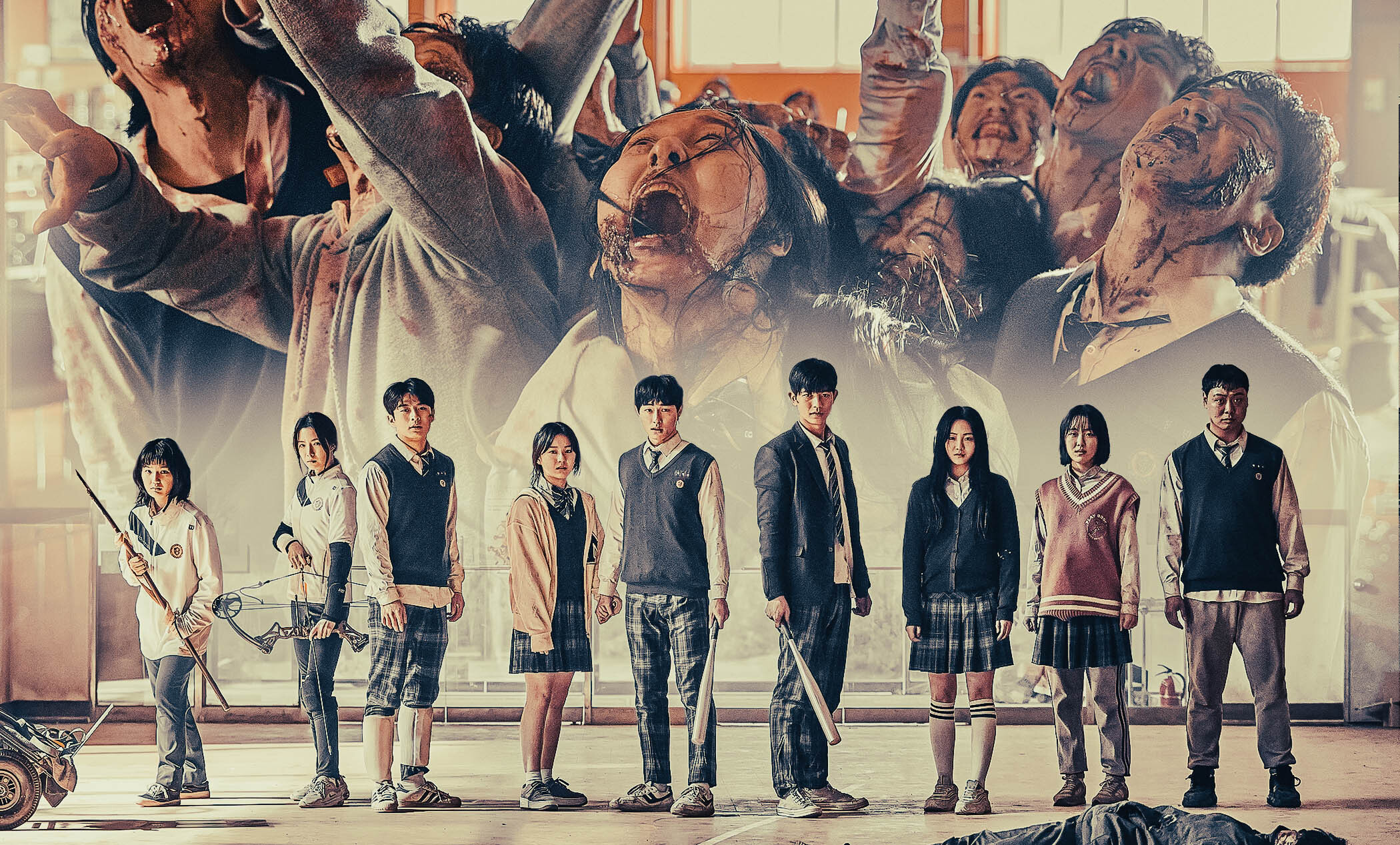 A high school turns into ground zero of a virus outbreak that changes humans into zombies in All of Us Are Dead – a new Korean series that has joined the ranks of the most-watched shows on Netflix. The show has topped the charts on the streaming platform in 25 countries including India. And it only took one weekend to achieve this feat. Before you think it, any comparison to Squid Game is plain lazy. The show is a solid addition to the zombie genre and packs a punch with its underlying commentary on schooling systems and society as a whole. All of Us Are Dead directed by Lee Jae-gyu, based on a webtoon by Joo Dong-geun features a cast of fresh and familiar faces including, Park Ji-hoo, Yoon Chan-young and more. The show is inventive in its approach and the most striking are perhaps its zombies. The undead operate differently depending on the fictional worlds they are in. And let’s just say the undead in this show aren’t the slow creatures we are used to witnessing in films like Dawn of the Dead.

The show revolves around a few teenagers who find themselves stuck at school amidst a virus outbreak. As the infection spreads, they are forced to fight their classmates and practically anyone who exhibits symptoms in a bid to survive. When they realise that help isn’t arriving anytime soon, they are confronted with the task of learning about the zombies and how to defeat them. But since these aren’t regular zombies, here’s what they’re up against –

This section of the article contains spoilers from All of Us Are Dead.

Zombies in All of Us Are Dead explained:

The zombies in the series are supercharged if you will. They are strong, almost resistant to damage and they have heightened hearing and smell. They also seem to be able to repair some of the injuries they sustain, making them powerful opponents. In the very first episode, Jin-su (Lee Min-goo) the kid who was first turned into a zombie is seen fighting off a bunch of bullies and even after a fall from the roof, he’s alive and kicking. The same goes for Gwi-nam (Yoo In-soo) who survives a fall from the school building thrice. So not only are these zombies fast but also impossible to kill to a certain degree which makes them so much more terrifying. The basics of these creatures vying to eat away at flesh and brains remain the same. We also know that the infected are basically dead and give off a rotting corpse smell as the virus takes over their body. The virus seems to spread through blood and open wounds and not just by being bitten. Once infected, a nosebleed followed by clunky unnatural body movements are the first signs symptoms.

According to the rules of the undead, they must also have a fair share of weaknesses. The most obvious one is their impaired vision. In episode 3 we see Han Gyeong-su (Ham Sung-min) transform into a zombie and his vision is blurry and red. This is why the zombies’ sense of smell and hearing are sharper. As strong as they are, the zombies can be killed. They can be stabbed, shot and thrashed in the head to stop the virus from functioning. Moreover, although these zombies aren’t the smartest creatures so it’s not like they can strategise before an attack. It’s still pretty much mindless groaning and hunting for humans.

One of the best plot twists in All of Us Are Dead is perhaps the introduction of half-zombies. Some who are infected by the virus end up turning into the undead while retaining some of their humanness. They have the personality and the brain function that they had before being infected but also have a newfound craving for flesh and blood like a zombie. This makes for interesting plot points as characters use this half-transformation in different ways. Nam-ra, a fan favourite character, for example, uses it to help her crew of friends while Eun-ji (Oh Hye-soo) who was bullied uses it to get revenge. Pretty neat.

The characters in the show are also aware of zombie movies and even cite Train to Busan starring Gong Yoo as a reference point while discussing the strengths and weaknesses of the zombies. All of Us Are Dead uses zombie tropes to talk about issues faced by youngsters – bullying, sexual harassment, class conflict, along with normal teenager stuff like navigating crushes and friendships. These give way to interesting discussions. All-in-all the show with all its bloody scenes and gut-wrenching action explores what it means to be human. You just have to know what it means to be a zombie to understand it.

All of Us Are Dead is currently streaming on Netflix.