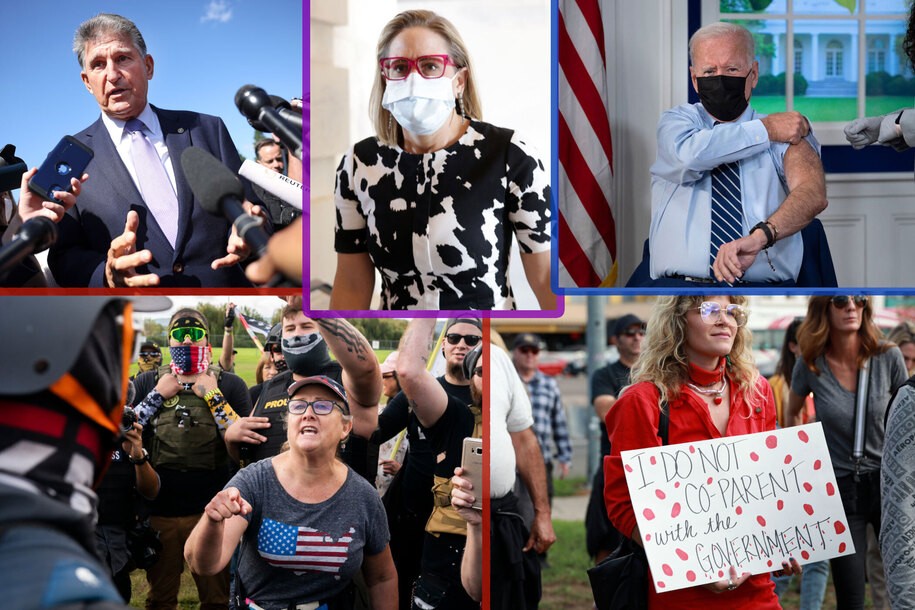 In years past, we’ve usually expected news and engagement to pick up after Labor Day when Congress is back in session. But this year, news picked up even earlier due to the Supreme Court ruling over abortion, which allowed Texas’ outrageous SB 8 law to stand—and then let’s not forget the ongoing pandemic. After a drop in engagement in the spring and early summer, September marked the third month of increased engagement on the site.

The rise of the delta variant has brought on a wave of stories related to anti-vaxxers, anti-maskers, and mandates; this month, 48% of our top 50 stories were about COVID-19. A good chunk of these stories have been reporting on anti-vaxxer individuals getting infected with (and dying from) the virus, all in the name of “freedom.” In fact, Kos built an entire series called the “Anti-Vaxx Chronicles” documenting many of these cases. The overwhelming majority of stories that topped our engagement list this month were about right-wing extremists in one form or another—whether we’re talking about the anti-vaxxers, insurrectionists, Proud Boys, or legislators who have gone off the rails. The three most engaging stories of the month fall right in line with this, with Aysha Qamar’s Anti-vaxx couple dies of virus days after claiming they survived pandemic despite being unvaccinated topping the list, followed by Dave Neiwert’s Proud Boys’ violence spirals in Olympia as street hunt for ‘antifa’ culminates with Toese shooting, and Insurrectionist Pauline Bauer Hauled Off To Jail Screaming “NO, I’m Not Going Back To Jail!” by community member Merlin196357.

We’ve also continued our focus on pushing Democrats to pass an infrastructure bill, funding the government, advocating for the protection of voting rights and of immigrants, all in the face of blanket opposition from Republicans. (Along with a couple of Democratic senators.) We’ve also been tracking the fealty to Trump and what that might mean for the Republican Party in 2022, and movement on the Jan. 6 Commission, with subpoenas being issued to a boatload of Trump insiders—sadly, none named Trump—which has received a lot of attention from us, and will continue to do so as the investigation continues. Our teams have also spotlighted numerous incidences of racism and police brutality, discrimination against trans youth, the rise in violence against AAPI people, the Gabby Petito case and “Missing White Woman Syndrome,” and many more stories related to social justice. And Denise Oliver-Velez, part of our Community Contributors team, also launched a new series this month we hope you’ll check out called Caribbean Matters, which covers events, politics, and cultures of the Caribbean and the Caribbean basin.

Our Activism team had a busy month—a record-breaking month, actually. Daily Kos sent more letters in September (over 1.7 million) than ever before. We’ve been organizing efforts to pass the Build Back Better Act, asking Democrats in Congress: Are you with us, or with corporate lobbyists? In September, our Activism efforts also included get-out-the-vote efforts to defeat the California GOP recall, actions to pass WHPA, expand the Supreme Court, and end corporate donations to anti-abortion legislators; fundraising for abortion funds in Texas and neighboring states; launching two immigration joint actions calling on Democrats to pass protections for migrants this year and calling on the Biden administration to end all deportations to Haiti; and calling on Nabisco and tortilla company El Milagro to end their campaign of abuse against workers and ensure that they are treated with dignity and respect. We also launched an End DeVos’ Title IX campaign with the National Women’s Law Center, calling on Biden and his administration to undo Trump’s/DeVos’ harmful policies and protect students and survivors; a petition campaign to Alabama lawmakers to vote “no” on new prisons and talking about how the BBB plan works for Black people specifically; two campaigns focusing on corporate accountability; and a swap petitioning Facebook to end its algorithm.

Following the long-delayed release of data from the 2020 census in August, redistricting season finally got underway last month, and boy has our Daily Kos Elections team been busy. Oregon got us started as the first state to adopt new congressional maps, followed by Maine, Nebraska, and Indiana, with many more states coming down the pipeline, including Texas and Colorado. The Elections team has been crunching the numbers for these new districts and will keep churning out new data until the very last state is done. We’re also covering the flurry of litigation that’s followed the adoption of these new maps, much of it aimed at halting GOP gerrymandering.

There were plenty of actual elections on tap as well, including the California recall, in which Gov. Gavin Newsom proved the pundits wrong and won in a resounding landslide. Two major U.S. allies also held elections, Canada and Germany, and we previewed and recapped both, with the center-left winning both. And finally, we had more than a little fun writing up the latest Republican to consider a bid for Alabama governor, whose campaign platform is centered on that most dastardly of threats: yoga in public schools. Really, we’re not kidding! Seems like he could benefit from a few shavasanas, wouldn’t you say?

Lastly, we held our first-ever Daily Kos Community Writing Workshop in September! This virtual workshop was led by Managing Editor of Community Content Jessica Sutherland, Content Strategist Cara Zelaya, and Managing Editor of Trending News Jen Hayden. It featured some basics of storytelling, some data on why community writing matters, and how you can write more engaging headlines for your stories. If you missed it, you can read about it and watch the recording of it here.

Feel free to drop some highlights of your own in the comments below!

How long have you been reading Daily Kos?

How long have you been reading Daily Kos?

Since the years of He Who Shall Not Be Named

I just started this past year