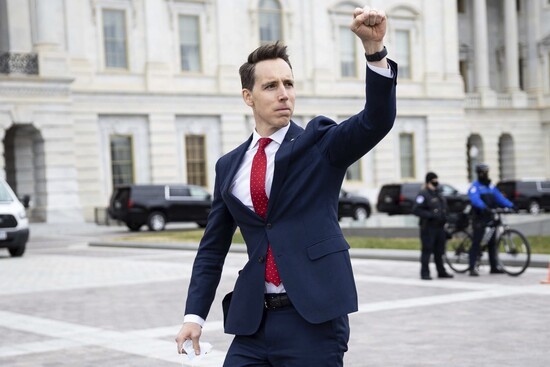 It’s a Republican Party that wants to claw back those blessings of liberty from everyone who’s gained them in the past century—from women, from Black and brown people, from LGBTQ people, from the disabled and the poor.

Case in point: former presidential candidate and current Texas Sen. Ted Cruz. He was one of 147 Republicans, eight of them senators, who voted to overturn President Joe Biden’s election on Jan. 6, hours after a violent mob attacked the Capitol intent on a coup. Cruz was an early cheerleader of the mob, rallying a crowd in Georgia on Jan. 3, 2021, saying, “We will not go quietly into the night! We will defend liberty!”

Fast forward one year. On Wednesday, the Senate Rules Committee held an oversight hearing with the U.S. Capitol Police, in which Cruz actually said this: “We are approaching a solemn anniversary this week. […] [I]t is an anniversary of a violent terrorist attack on the Capitol where we saw the men and women law enforcement demonstrate incredible courage, incredible bravery, risk their lives to defend the men and women who serve in this Capitol.”

He continued, “As we reflect on what happened a year ago, it is also worth asking as we have as this committee has as this Congress has, I know you have—what could have been done differently? What could have prevented the breach of the Capitol, what could have prevented the riot getting as far as it did?” As if he was not instrumental in the instigation of that violence. As if he did not return from it hours later and vote to validate it by perpetuating the Big Lie.

It is of course not just Cruz, or Missouri Sen. Josh Hawley, who urged on the rioters with his raised fist on the morning of Jan. 6, as he walked to the Capitol to aid and abet Trump’s attempted coup. It is essentially every Republican.

It is most particularly House Minority Leader Kevin McCarthy and Senate Minority Leader Mitch McConnell, who handed the whole damned country and every function of government to Trump on a silver platter. It’s Susan Collins and Lisa Murkowski and every Republican senator who could have stood against Trump, who had the power to use the Senate as the founders intended—as the block on executive power.

It’s Mitt Romney, who was in imminent physical danger on Jan. 6, saved by the quick thinking and astounding courage of Officer Eugene Goodman.

Remembering back a year, Romney said this on Thursday: “We ignore the lessons of January 6 at our own peril. Democracy is fragile; it cannot survive without leaders of integrity and character who care more about the strength of our Republic than about winning the next election.” For his hypocrisy, Romney is part and parcel of the Republican seditionist movement.

He is helping McConnell and the other 48 Republicans filibuster the Freedom to Vote Act and the John Lewis Voting Rights Advancement Act. Romney is standing with his fellows in the Republican Party who would happily take away Officer Goodman’s right to vote.

When the founders so carefully crafted the Declaration of Independence and the Constitution, they did so knowing full well the frailty of what they were putting forth. As Ben Franklin so wisely (probably?) pronounced, they created a republic, “if you can keep it.”

They put in the guardrails for democracy that they could—including a means by which a despotic and dangerous president could be removed. Little did they know that less than a century later, a Civil War would put all that in jeopardy, but they would celebrate that the nation was preserved.

What would really horrify them is that in the century after that war was fought and won, a group of entirely unprincipled, unpatriotic, prejudiced, and avaricious politicians would resurrect it. That elected leaders would refuse to exercise their power to protect the Constitution, would take over half of government, and would stand essentially in support of an insurrection against it.