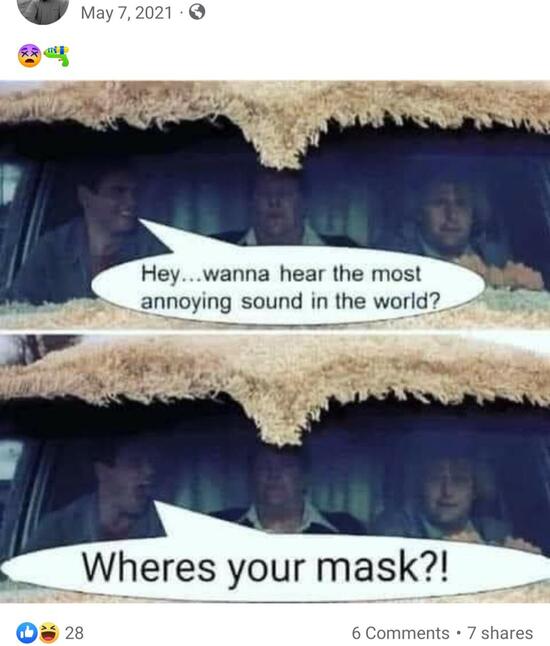 Not as annoying as “your loved one died of COVID pneumonia,” but we can agree to disagree.

“Kamala Harris is not Black and Joe Biden has dementia.”

Uh, which part is partly false? The one false claim or the other false claim?

(I searched, but couldn’t find this specific fact check. Looks like some algorithm picked up part of the meme and applied a previous fact check to it.)

“Slaves were freed? What a crock of shit! Unfriend me for being so racist!”

By the way, this is double racist; claiming Father’s Day is a “white” holiday—the insinuation being that Black fathers are absent or Black mothers don’t know the paternity of their children—is a common trope among the deplorables.

With the hateful Rachel Levine meme up above, this guy was a true piece of shit.

He forgot this one:

Not even Hollywood has invented a scarier mask than that one. Too bad they don’t realize it.

Seriously, it would’ve been a lot easier to simply google the question to get the correct answer. Instead, he thinks he’s being all GOTCHA and clever by posting his ignorance.

Literally true. Getting through their thick, bigoted, ignorant skulls has proven to be a daunting challenge.

Redemption is always beautiful, even if he’s an asshole. The same people cheering on his bullshit are now having to cope with this plot twist. These words likely have more impact on anti-vaxxers than anything you or I could ever say.

He makes a particularly poignant point—he thought this was all about him and his own risk, not realizing that his actions would affect his loved ones. I wonder how much of that message is used in public service campaigns. It certainly might have more traction than “look out for your neighbors,” since these people clearly don’t give a damn. But “don’t leave your child without a parent,” or “don’t make your mama bury her child” would presumably be more effective.

Undoubtedly, this guy was a racist asshole. But there isn’t a single part of me that wants his son to grow up without his father. I don’t wish that on my worst enemies.

He’s owning being a dumbass.

Type 2 diabetes is caused by excessive weight. So he was obese, and we all know how much COVID loves obese people. There were so many reasons for him to vaccinate, it really shows the power of the propaganda machine that Facebook enables to short-circuit some people’s core survival instincts.

And if they really think that the Chinese engineered this, why wouldn’t they be extra motivated to protect themselves? If Chinese troops landed off the Oregon coast, wouldn’t they expect a robust defense? I doubt they’d be whining about “FREEDOM” if we had to, say, close down highways to more efficiently rush troops to the coast.

This was the famously cruel COVID dead-cat bounce. Seriously, he’d be better off dying than giving him and everyone around him false hope of his recovery.

He was a racist, transphobic prick, but I feel for his son. I truly do.

Showing up at a public official’s house is not universally acceptable, nor should it be