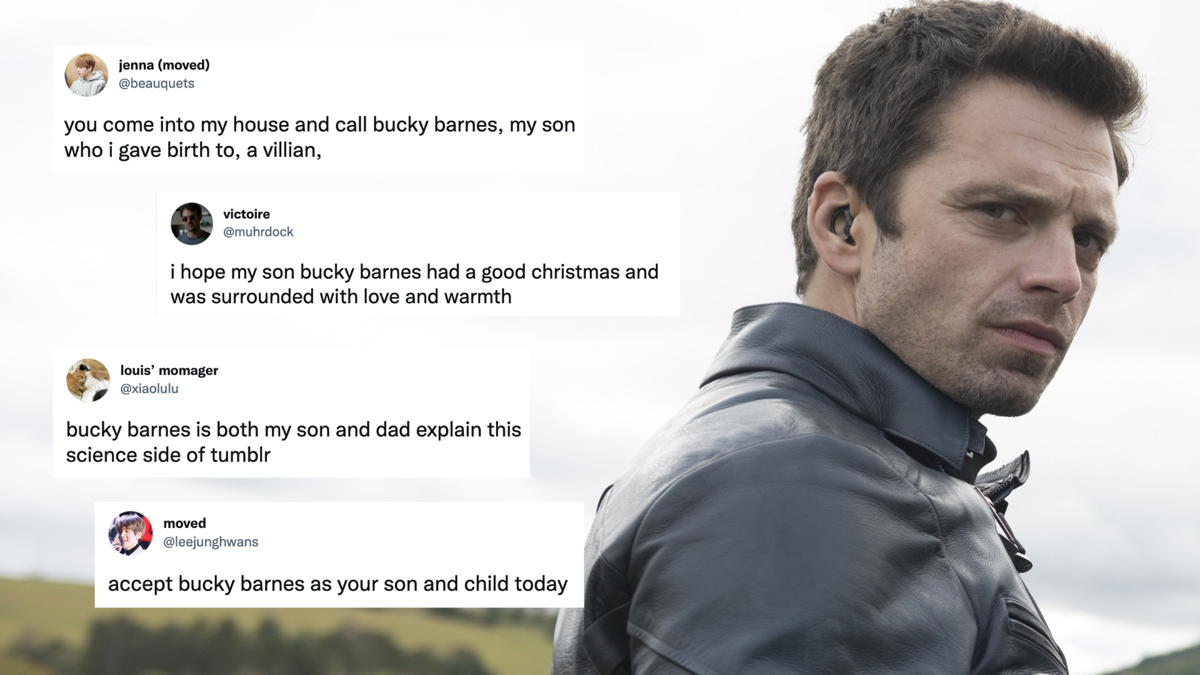 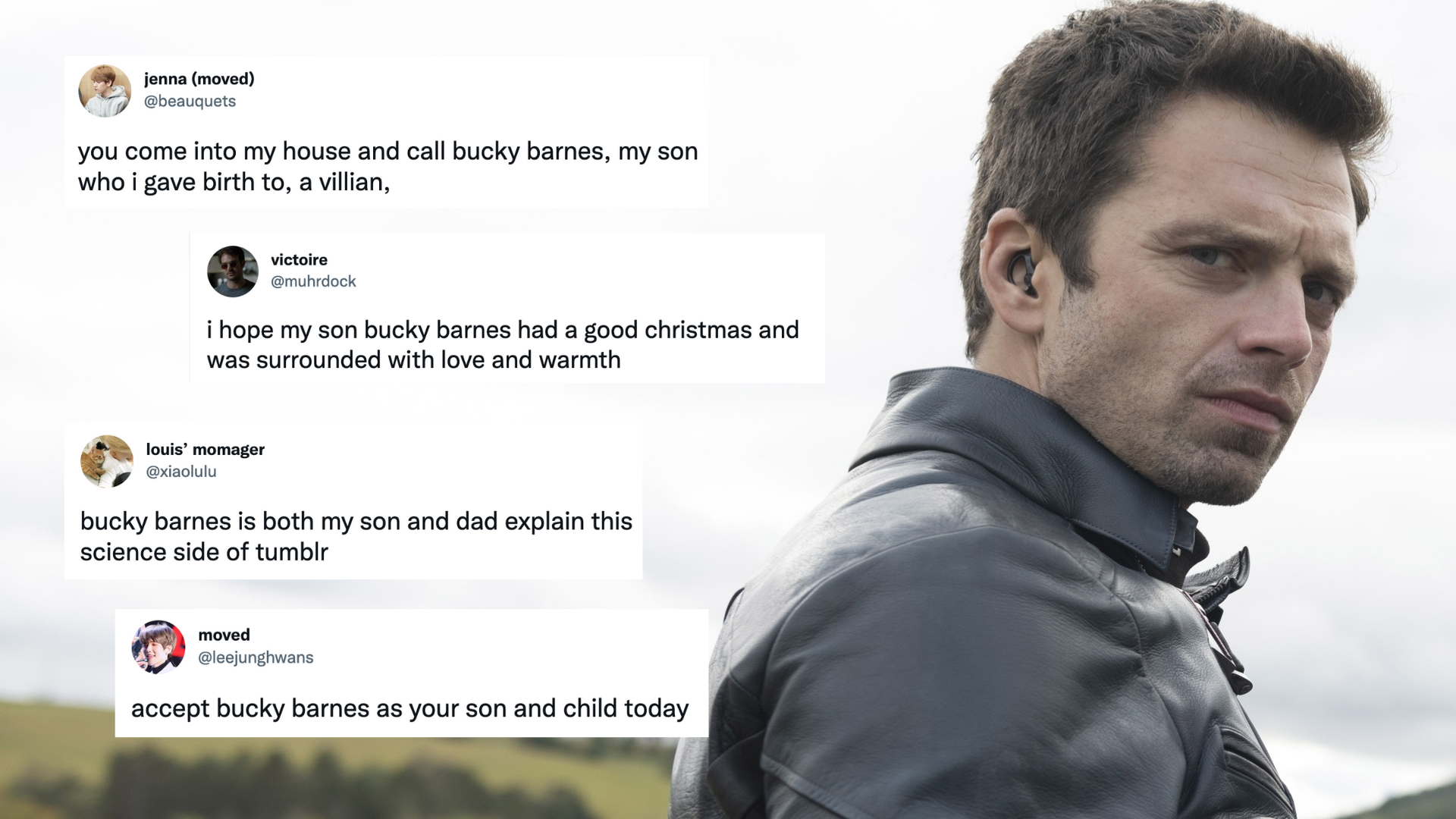 There are so many ways we tell our favorite celebs that we love them. Last year brought us bestie. Bae is so 2013, but it’ll do the trick. Dad and mom are almost a decade old and have since been joined by zesty newcomers zaddy and mommy. Lorde thinks Kim Kardashian is mom, while Taylor Swift prefers to be called aunt. And in fandom, we have our sons.

“I’m a huge Phoebe Bridgers fan and when people call her ‘mom’ it’s like, ‘You’re so cool, I wish you were my parent so you could nurture me,'” says trend expert Amanda Brennan. She spent seven years at Tumblr studying its communities and culture and remembers watching the rise of “my son” discourse in anime communities on the platform, specifically around Attack on Titan’s Eren. Instead of “you’re so cool,” son culture flipped the script to “you’re so cute.” Fans began talking about their favorite characters as their children, taking inchoate feelings of parental pride and investment and “amplif[ying] them up to 12,” she says. “Like, ‘man, I want them to do so good… I want to nurture the shit out of them.'”

Julia Henn, a 24-year-old writer from Brazil, says son and daddy/zaddy are two sides of the same emotional coin. You’ll know a “daddy” when you see him. “It’s just the feeling that a certain man that fits a certain description gives you… the feeling of being taken care of, feeling safe,” she says. “For a son, it’s the need to take care of someone, the urge to see them thrive, but you don’t want the more literal parts of the ‘son,’ it’s just affection.”

The word actually falls short of the emotion it tries to capture, but it’s all we have. “[Son is] definitely not an accurate representation of my feelings,” says Henn over Twitter DM, it’s just the “word that we instinctively use when referring to someone (often younger) we love and wish to protect.” Her feelings about her sons are way more nuanced. “I don’t believe having that protective feeling towards someone and being attracted to them are mutually exclusive,” she notes. “I call [22-year-old] Choi Yeonjun from TXT my son, but I do have a crush on him.”

For a son, it’s the need to take care of someone, the urge to see them thrive…

The concept of a “parasocial relationship” is more than 60 years old, but we haven’t developed new vocabulary to properly express the affections it stirs within us. While we chat, Brennan scrolls through the “my son” tag on Tumblr and comes across a post about a role-playing battle game where users play as personified cookies. A simple line drawing of hands in different positions has been edited to redefine their functional duties: “pat,” “hold,” “cherish,” and “forfeit all mortal possessions” to a Sherbet Cookie character. It’s compelling evidence of the shortcomings of our existing vocabulary. “What does the relationship of a human to a cookie look like? You don’t know. You just think it’s cute. Clearly, it is your progeny, right? I think [son culture is] just trying to understand your feelings in a relationship hierarchy that is already well understood.”

The easiest way to draw a line between “son” and “zaddy” is age. Stitch, a 30-something culture writer and media critic, pens a column about intersectionality in fandom for Teen Vogue. Celebrities her age and older are zaddy (Rain, Miyavi) and mommy-worthy (BoA), while younger ones are sons, daughters, nieces (Zendaya, Megan Thee Stallion), or nephews (Lil Nas X, 20–year-old Afro-South Korean model Han Hyun Min).

But age can be overridden by vulnerability. When Marvel’s Captain America: Winter Soldier was released, Brennan says soldier-turned-brainwashed-assassin Bucky Barnes drew this reaction from Tumblr fans of all ages: “If I could just protect him, I could help him recover from his [brainwashed] state.” Sebastian Stan, the actor portraying Barnes, later became “Tumblr’s boyfriend,” but Barnes remained son material.

For fictional characters, age may not matter at all. In that case, “they’re all my babies,” says Stitch, “because they’re not real.”

That distinction — that they’re not real — helps fans grow attached to characters written to be generally unpleasant, utterly loathsome, or unequivocally villainous. “Tumblr loves a broken male character,” says Brennan, and notes that fan favorites Barnes, Sherlock Holmes, Jughead Jones, Draco Malfoy, and Kylo Ren fulfill “the trope of a rough and tumble boy who has feelings that they can’t let out.” When they become vulnerable and finally express themselves, “that’s what makes the magic.”

Brennan shows me a piece of fanart of a grumpy looking Darth Maul, with a little grey rain cloud floating above his head. The likeness, which has been tagged as both “my son” and “my favorite pointy lad,”  purposely subverts the depictions of Darth Maul in the Star Wars source material. The artist is basically saying, “Darth Maul isn’t a bad guy. Darth Maul is having a bad day, and I need to give him soup because he’s my son and I care about him.” It reimagines him with a full range of emotions, as if the fan is in dialogue with the character, telling him, “I have this mood sometimes and I see it in you and that’s OK.”

Stitch calls those characters her “trash babies” or “garbage sons.” Their abrasiveness or unlikeability is rooted in deeper trauma, like Gundam Wing’s Wufei, who was arranged to be married at 14 and whose wife later dies defending him. “That’s trauma,” says Stitch. “So he’s angry and he’s a little misogynistic and it sucks but that’s my boy… For me, I want you to be messy.” When an idol reveals imperfections, it deepens her connection to them. “I’m like, ‘Oh, you’re one of us. You cry sometimes in the bathroom.’ It helps further humanize them.”

Stitch has many faves, but she says “most of my ‘celebrity kin’ tend to be Black.” She started watching Kuroko’s Basketball after a Tumblr gif of Daiki Aomine caught her eye. “They never say ‘this guy is Afro Japanese at any point,’ so I’ve decided that he just could be.” Zendaya reminds her of her two little nieces. And her “non-binary Auntie mode” is activated when her fave is in trouble, like when people gave Lil Nas X flack as he promoted Montero or when Megan Thee Stallion struggled in the public eye after she says she was shot by Tory Lanez. Part of her job as an aunt is to “make sure that the children know they are loved, right?”

So when Megan graduated from college last year, Stitch congratulated her on Twitter. “I was like, ‘I’m so proud of you. You’re incredible,’ hyping her up like I would a niece. I don’t do it with the expectation that they’ll see it but with the hope that if they do see it, especially if things are tough, that they’ll say ‘this blue check… said something nice to me.'”

Henn also feels protective of her kids. “I coo at all my idols when they act cute, I want good things for all my favorite characters. But as for my sons and daughters, mostly I just get this sense that they are all undervalued and I want to be sure that they receive the attention and recognition they deserve.”

When K-pop group BTS opened personal Instagram accounts she said she was excited to have more of their content on her timeline. But when her son/crush Yeonjun opened his account earlier this week, “My instant reaction was ‘oh my god, my baby,'” she says, adding the pleading face emoji for emphasis, “as if it was some huge achievement.”

Valerie Lopez, a 23-year-old writer, says she tends to be drawn to K-pop idols that are introverted, like her. “I have different categories for son/daughter and bro/sister,” she says over DM, which may be because “I am an older sister, too, and Latina so I feel like my upbringing also influences this; we are always taught to care for younger people.”

I can relate, since I see reflections of myself (and my ADHD and depression) in my favorite K-pop sons and daughters, too. Many of them exist in their own realities, can’t stop talking, mother other group members, or are unabashed nerds who hyperfixate on a hobby. I take solace in our similarities and feel like I can understand their experience of the world better, too.

I’m like, ‘Oh, you’re one of us. You cry sometimes in the bathroom.’

There is a limit to that connection. “It’s all dependent on their government-assigned personalities,” says Lopez, by which she means: The way a celebrity appears on screen and in public is not who they really are. Brennan agrees that unregulated feelings of closeness have the potential to “take you down a complicated route of falling in love with the potential of a person, not who they are.”

But research tells us that these attachments are usually net positive and tend to enrich our lives more than detract from it.

In 2020, my colleague Amanda Yeo wrote about how son-adjacent “emotional support K-pop boys” help fans in myriad ways. Studies have shown that parasocial relationships can help regulate or mitigate loss of self-esteem and feelings of social rejection. Others have found that showing someone a picture of a favorite television character can increase their performance on certain cognitive tasks. Dr. Jennifer Barnes, a fiction writer and assistant professor of psychology at the University of Oklahoma, noted in a 2015 TED Talk on the subject that the benefits of real-world relationships correspond closely to the benefits of parasocial relationships. Her research found that people experience the same or heightened levels of grief over the death of a fictional character than for a real-world acquaintance.