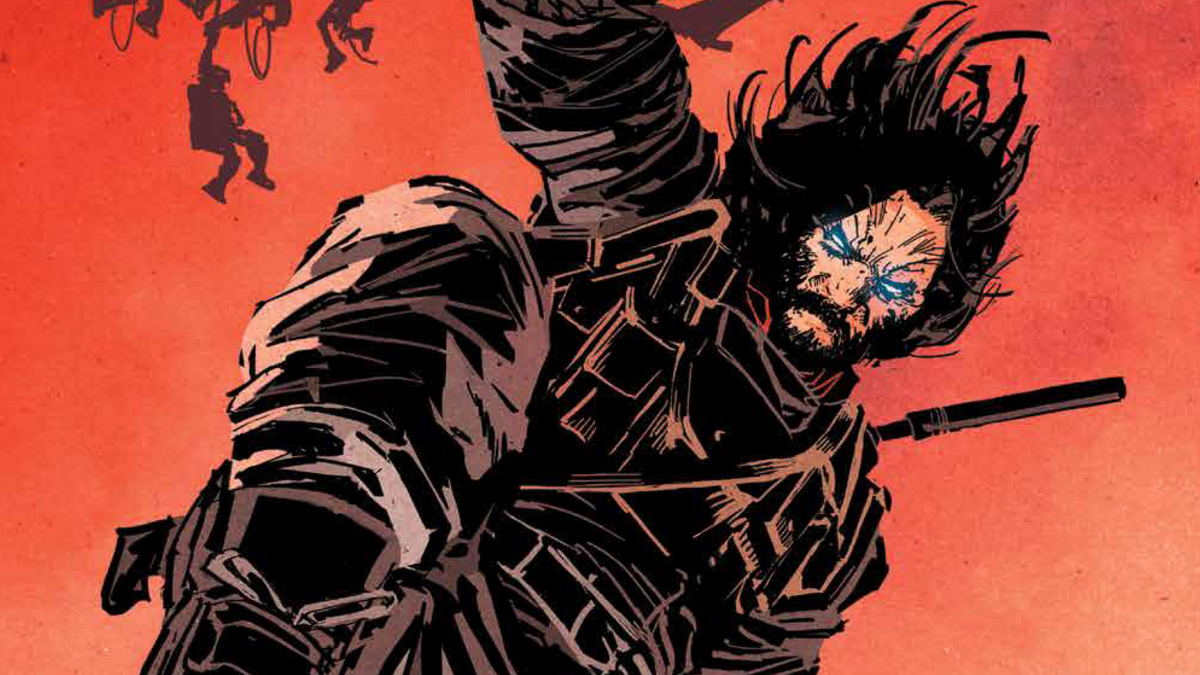 In case you missed it, Keanu Reeves co-created the highest selling debut comic in 30 years.

Not content to reside in the storytelling realms of film, TV, and video games, Reeves spent years formulating an idea for a comic series about a berserker — an 80,000-year-old, half-mortal, half-god character known as “B.”

The series follows B’s search for answers in his very, very long past. His frenzied, violent fighting style hints at a dark mystery, one he’s trading his skills to the U.S. government in order to uncover. As B is sent on one dangerous military mission after another, often painfully reduced to nothing more than his own pulverized muscles and bones, he digs into his memories with the help of a doctor, Diana, and a mysterious figure called Caldwell. But his past, 80,000 years long, holds some intensely dark and otherworldly secrets — especially to do with his parents and his purpose.

Of course, with a big Hollywood name like Reeves attached, it’s no surprise streaming giant Netflix secured a deal with Boom! Studios to the rights to the film adaptation, which will be followed by a spinoff anime series. It’ll be the latest comic adaptation for Netflix, which has seen significant success with titles like The Umbrella Academy, based on the comics by My Chemical Romance frontman Gerard Way and artist Gabriel Bá, not to mention its fierce investment in anime.

Reeves will star in both the film and anime series. However, the release dates have yet to be revealed — the Matrix and John Wick star is pretty busy with fourth installments of both major franchises, after all.

In an effort to find out how this team came together to create the biggest debut comic, I chatted to Reeves, Kindt, and Garney about their process, the curse of immortality, and how the hell they’re going to get this violent, dark, tragic tale to the screen.

The following interview has been edited for length and clarity.

Mashable: First things first: Keanu, why did you want to create this comic with Matt and Ron? How did you come up with the concept?

Keanu Reeves: I really enjoyed comics growing up as a kid — still enjoy reading ’em…I had an idea, just this one kind of image of a character, a berserker. It was in a Viking setting, ripping off arms, punchin’ through chests. This idea that he was half-man, half-God, and what would that be? And who was cursed with this idea of violence. Taking that, Boom! [Studios] started to introduce me to put the team together. I met Matt Kindt, we hit it off, and away we went. Then as the words started to come together, we needed pictures! So we got some pictures with Ron Garney. And here we are, speaking about the origin story in the first arc of BRZRKR.

That’s quite the team. How do the three of you work together? Have you been using video calls, do you meet up? How do you actually write together and come up with illustrations?

Matt Kindt: Well, we met in real life for a while. But then one of us is so busy that it’s hard to meet in person. It’s not me. I’m at home all the time.

KR: Matt and I, we flesh out the story. Matt writes it. I’m new to the form, so I’m just learning it. Then we hand it over to Ron, and Ron draws it. We also have a wonderful colorist, Bill Crabtree, and legendary letterer Clem Robins. So a lot of it’s, really, masters of their craft making this comic book.

This character “B” has been alive for 80,000 years and just wants to be able to die. I wanted to ask about this curse of immortality — what is it about this concept of living forever that fascinates you all in this series? Why did you want to dig into it in a comic?

KR: For me, I liked that it was a blessing. Well, not a blessing. That he was immortal but also cursed, that there was something that was out of his control, out of his will. It just seemed like a really big sandbox and playground. And because, for me, the character is looking at violence in all of its incarnations and who we are, it afforded us to be able to take that over time. Gentlemen?

MK: I’m a huge student of history. So the part that appealed to me other than the immortal character is the things that he would have seen. There’s a character in there named Caldwell, who I don’t know if he’s a good guy or bad guy, but he’s the one I probably relate to the most. Because he just wants to know what happened — what happened 80,000 years ago, tell me all about it! I love that idea of seeing all this through his eyes.

You mentioned violence, and a major part of BRZRKR is that it’s extremely violent. You know, there’s eyeballs on page six, which is so impressive. How do the three of you develop this level of gory violence on the page? And how are you going to bring it to the screen with the Netflix adaptation?

KR: Ron, you want to talk about that? You draw it. The pen is in your hands.

RG: I’ve made the point before that, for me, it’s like being a conductor of an orchestra in a way. I want the violence to feel ballet-like and musical, a symphony of it…so there’s always a flow and a movement throughout the page. In a way, there’s more impact in that rather than it just be, ‘Oh look over there, there’s an eyeball,’ but it’s the flow that brings you through it…the choreography and things like that. So that’s kind of the way I approach it. It is extraordinarily gory, I guess — you know, I could probably get in there and make it even worse, but I’d rather not, I try to keep some beauty to it. Look, no matter what, the savage nature of this planet is a beautiful thing too, the savage nature of violence is a beautiful thing, in a way…it’s just a matter of interpretation, I guess. So I’m just trying to create that…A lot of guys might shy away from doing something like that, but I want to embrace it from that point of view, the beauty of it, in the art form of it.

There is a beautiful frame, which I think is in the first issue, in which B’s nose gets blown off. That was both very violent and very beautiful at the same time.

RG: It’s going to be interesting to see Keanu if that makes it into the movies, see his nose get blown off.

MK: Not the nose!

RG: Anything but his nose!

[Keanu Reeves is, indeed, holding onto his nose at this point]

KR: I think in terms of translating to a film, yeah, it’s going to be a really interesting, fun, exploration of what does that look like? How is it achieved? How is it impressionistic? How is it balletic? How is it symphony? How does it move us, but not repulse us? We want don’t want to look, but we want to look.

Yeah, this is a man that can singlehandedly take down an army many times.

RG: There’s a tragedy in it too…That’s all he’s created to do. So you try to find the humanity in that, ultimately, and oddly enough you start feeling sympathy for the character. I was mentioning before that, there’s a moment where he just turns and looks right at the camera, and it’s like all of that comes back at him and he’s accepting of it. That’s a tragic thing because he has no control over it. It’s not that he wants to be that so he’s willing to give it back, project it back, and he looks right at us. A very poignant moment, I thought.

Definitely. I was thinking about the level of stunt work that might be involved in that opening sequence from issue one in the live action version. Keanu, are you ready for that?

KR: Well, I don’t do stunts, but we’ll definitely give it a try.

RG: They’re gonna CGI him when he plays little B, they’re going to not use an actor, they’re just going to CGI Keanu down to real short and small, play little B. [laughs]

So I definitely have to ask one tiny question. I noticed that the pill that B takes is red and blue (and a few fans have). Is this a deliberate Matrix reference? I have to ask.

KR: I have nothing to do with that! That was…

MK: Bill, it was Bill Crabtree!

KR: Right, the colorist! But he did what Ron did by making this pill that had a strong dividing line. And then he did make it blue and red. So I don’t know if Ron had any influence on that as well.

RG: In my head… maybe? I’ll give Bill the credit for that one.

KR: But there is this story of control. I think it’s fun to take these icons, these props, and these symbols that we’ve created and ingested and that are part of us now as storytelling. There’s a shorthand there. It’s like awake and control at the same time. And I think we all have that.

“I think it’s fun to take these icons, these props, and these symbols that we’ve created and ingested and that are part of us now as storytelling.”

I wanted to speak about launching BRZRKR through Boom! Studios, an independent label, which is a huge move, going up against Marvel and DC, who Ron and Matt have obviously worked for. Where does BRZRKR sit in the comic landscape from an independent perspective?

MK: Honestly, I think that we’re not against Marvel and DC. I think we’re bringing in new readers, if anything. Or if you’re reading Marvel and DC, or reading another, branch out and read this. I think if anything, it’s just positive for the industry that I love. I’ve been working in comics for 20 years and I love anytime there’s a new reader reading comics, that’s good, because it’s such a great art form and I think people are just discovering it.

RG: What I love about this is that it’s a completely new character that’s been injected into the industry that nobody saw coming, that has a major impact, and it’s a big deal for this industry. You can’t take that away from it, it’s forever. No matter what, this is just as cemented in the comic book lore as…[Frank] Miller’s Rōnin, or any of these things. This is what it is and I’m happy and proud to have been a part of it and to help make that happen. It’s been pretty great for that reason: it’s forever. This has been a unique thing, and the industry needed it too.