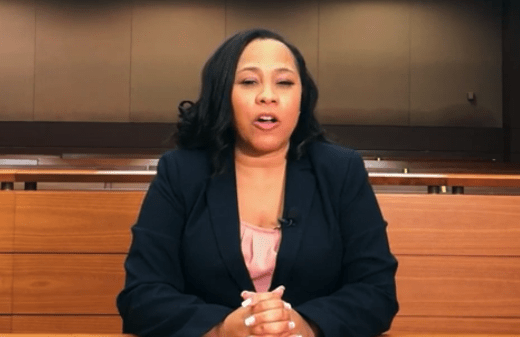 Fani Willis is probably not a household name. Not yet anyway. But District Attorney Willis is fighting a huge battle on her home turf in Fulton County, Georgia.

Willis is a Georgia native. She graduated from Howard University in Washington D.C., then returned to Atlanta to attend Emory University School of Law. She’s spent 16 years in the Fulton County district attorney’s office. She was elected district attorney in 2020.

Willis also won the opportunity to subpoena reluctant witnesses such as Georgia Republican Secretary of State Brad Raffensperger, who pushed back on Trump’s request to “find” votes on a January 2021 phone call, but recorded the call, which prompted Willis to open an investigation.

James has gone after Trump’s taxes, personal and federal returns, Trump University, Trump Foundation, and a slew of other fraud-related activities. Most recently, James went after Trump’s derelict kids and the role they’ve played in his criminal empire.

“No one in this country can pick and choose if and how the law applies to them,” James tweeted in mid-January, adding that the three Trump offspring “have all been closely involved” in some Trump Organization transactions that, according to the attorney general, “used fraudulent and misleading asset valuations on multiple properties to obtain economic benefits, including loans, insurance coverage, and tax deductions for years.”

In other words, James and Willis are on Trump’s ass like a dog on a bone.

But let’s go back a bit and look at the history of one woman in particular who’s set the stage, igniting some of the activism of Black women we see today.

While in Congress, she introduced over 50 pieces of legislation, championing racial and gender equality, the plight of low-income families, and ending the Vietnam War. She was a co-founder of the National Women’s Political Caucus in 1971, and in 1977 became the first Black woman and second woman ever to serve on the powerful House Rules Committee.

After retiring from Congress in 1983, she taught at Mount Holyoke College and co-founded the National Political Congress of Black Women. Her motto was, “I want to be remembered as a woman … who dared to be a catalyst of change.”

Abrams served 11 years in the Georgia House of Representatives, seven as the Democratic leader. In 2020, her organization, Fair Fight, launched initiatives that funded and trained teams to fight voter suppression in 20 battleground states.

Abrams is a lifetime member of the Council on Foreign Relations, where she serves on the Subcommittee on Diversity.

Abrams is the author of Lead from the Outside, Our Time is Now, and While Justice Sleeps in addition to eight romantic suspense novels under the pen name Selena Montgomery.

Abrams received degrees from Spelman College, the LBJ School of Public Affairs at the University of Texas, and Yale Law School.

We can’t talk about powerhouses without talking about Vice President Kamala Harris.

Although her first year in office has been impressive, Harris has been scrutinized in a way that’s unlike so many of her predecessors in the role.

Harris has been tasked with some hefty high-profile assignments, from immigration and the root causes of migration and border security to voting rights legislation, as well as myriad foreign policy issues such as global health security, the rights of women and children, and strengthening relationships with the nation’s closest allies. All of this is on top of the fact that we’re all facing a pandemic with no immediate end in sight. Harris and the administration are already fielding questions about whether or not Biden will run again in 2024.

But Harris, much like Biden, has tried to ignore the babble on the Hill and simply put her head down and trudged forward getting the work done.

Now let’s jump ahead to a few of the nominees Biden has been tossing around for the Supreme Court seat.

Jackson served as a law clerk for three federal judges: Judge Patti B. Saris, and U.S. Court of Appeals for the First Circuit Judge Bruce M. Selya (1997–1998). Then she clerked for Justice Breyer from 1999 until 2000.

A year ago the movement #SheWillRise created a shortlist for Supreme Court nominees.

There are *far* more qualified and incredible potential Black woman nominees for SCOTUS than there are seats on the Court. We’re here and we’re ready to claim our spot #SheWillRise https://t.co/gVfm3C2MIE

Black women have been putting in the work for centuries, but remain largely marginalized in American politics despite being some of the most loyal Democratic voters—vital in Biden’s wins in Georgia, Michigan, and Pennsylvania.

“His campaign was struggling,” Rep. James Clyburn told the Atlanta Journal-Constitution, citing Biden’s three straight losses in the early voting states of Iowa, New Hampshire, and Nevada. “This was quite frankly do or die for him, and I urged him to come out publicly for putting an African American woman on the Supreme Court.”

Black women continue to organize, vote, and push for changes that are desperately needed in this country. So, it’s high time we recognize that these efforts should not be taken for granted.

It’s time to commit to supporting Black women to positions of power and advocating for policies that end ongoing disparities that Black women face—including fatal health care outcomes; wage and employment gaps; the overwhelming disproportion of incarceration, criminalization, and violence; and taking up the cause of voter suppression.