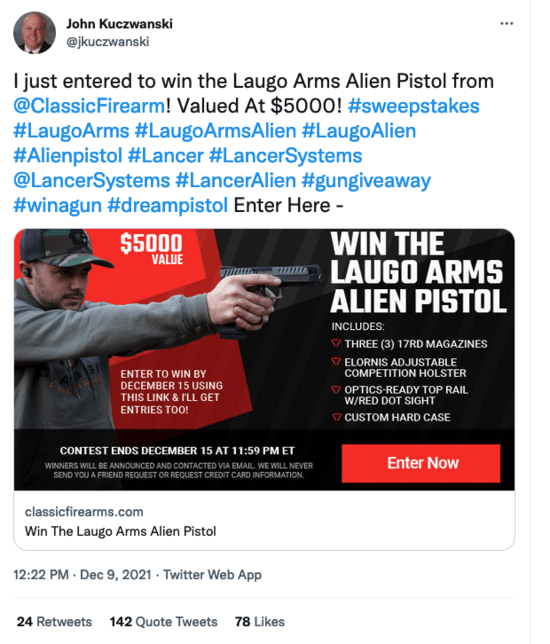 Anonymous sources tell Florida Politics that the driver of the Prius got out of his car and “confronted Kuczwanski about hitting him,” and then returned to his car to wait for law enforcement’s arrival (ostensibly to file a report for insurance purposes). At this point Kuczwanski reportedly rammed his BMW into the Prius’ driver-side door and “began pushing the car sideways in the parking lot.” At this point sources told Florida Politics that Kuczwanski shot a gun at the Prius, at which time the Prius driver, also a gun owner, pulled out a gun and shot Kuczwanski through the windshield. The Prius driver slipped out of the passenger side door and hid, not knowing whether or not Kuczwanski was going to continue shooting.

A shooting has occurred at the Circle K on Bannerman and Thomasville Road in Northeast Tallahassee. Waiting on the press release for the official information. pic.twitter.com/fhIqxtM53x

Kuczwanski was the Republican spokesperson for the Florida State Board of Administration (SBA). Director of Special Projects Dennis Mackee, the man Kuczwanski reported to at the SBA, told the Tallahassee Democrat that while he could not confirm that Kuczwanski was the man killed in the road rage incident, he could speak to his skill at his job. “He was a quiet fellow. Everything in his world was about his family.”

In a tweet, Kuczwanski’s wife reportedly characterized her husband’s death as an “assassination,” though no evidence points to that conclusion. According to multiple Florida news outlets, John Kuczwanski pled no contest to a road rage incident at the exact same intersection back in 2014. According to WCTV:

Arrest papers show a driver complained that a man in a red F150 pick up pointed a gun with a laser site at him while the two were at the intersection of Thomasville and Bannerman Roads.

According to arrest papers, the driver gave deputies the tag number and when they arrived at Kuczwanski’s home just a few miles away, he told deputies the other car had cut him off in traffic.

Arrest papers also say deputies found a gun matching the driver’s description in the console of Koczwanski’s car and arrested him for aggravated assault with a firearm.

Kuczwanski was given probation after that incident. His probation ended in 2018. He was clearly a gun enthusiast. Kuczwanski’s last social media post on Twitter was Dec. 9, 2021, where he wrote about entering a raffle in the hopes of winning a new gun.

The Leon County Sheriff’s Office (LCSO) released a short statement saying that officers responded shortly after 5 PM to a call in reference to a shooting. At that time they found Kuczwanski in his car suffering from life-threatening injuries. He was transported to a hospital by ambulance, where he was pronounced dead. “For now, no charges have been filed in this case.”

A spokesperson for the LCSO told the Tallahassee Democrat: “We understand that the public wants to know details and we want to provide those details. However, we will ensure that a through investigation has been conducted. Our investigators continue to review witness statements and video footage and will release more details when they become available.”

Florida’s Stand Your Ground laws are very clear when it comes to people defending their property with guns. Unless the surveillance cameras and eyewitnesses tell a very different story than the one being reported, Kuczwanski’s death will fall under the Sunshine State’s very expansive view of self-defense. In fact, under Florida’s gun laws, if Kuczwanski did indeed shoot first, he would—had he survived—likely been able to make the same claim of self-defense.