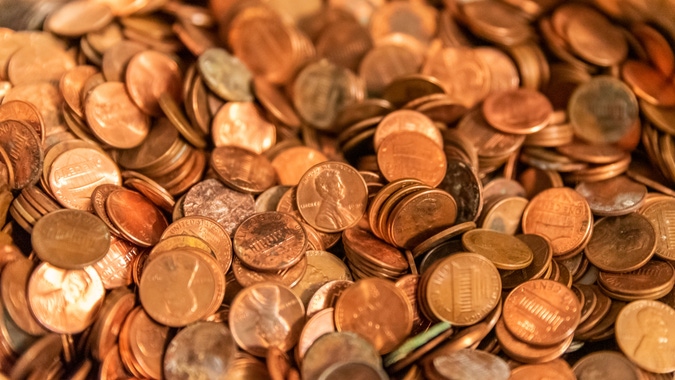 Amid what’s being dubbed “The Great Resignation,” millions are quitting their jobs and giving up a “work to live” mentality. An early pandemic adopter was Andreas Flaten, who was employed by an autoshop in Georgia before quitting last March.

After reporting an outstanding final paycheck to the U.S. Department of Labor (DOL), his remittance finally arrived in a rather unorthodox way: nearly $1,000 in greasy pennies (91,500, to be exact) dumped in his driveway, reportedly topped with a note reading, “Fuck you!” (In a video posted by Flaten’s girlfriend, she can be heard saying, “They’re covered in something; don’t know what it is, but it smells funny,” while showing an oily film on her fingers after picking up some of the pennies.)

Miles Walker, who owns A OK Walker Luxury Autoworks in Peachtree City, Georgia is now being sued by the DOL for the alleged incident. When Walker was asked whether or not he was responsible, he told CBS46 he didn’t “really remember” if he poured the coins. “It doesn’t matter; he got paid, that’s all that matters,” Walker told the outlet.

In an official statement, Steven Salazat, DOL Wage and Hour Division District Director of Atlanta, said, “Worker engagement with the U.S. Department of Labor is protected activity. Workers are entitled to receive information about their rights in the workplace and obtain the wages they earned without fear of harassment or intimidation.”

The suit is looking to recover more than $36,000 from Walker and his shop on behalf of Flaten and other employees after Walker allegedly broke overtime laws and withheld wages against multiple workers. And the A OK Facebook page is now flooded with comments from users calling out Walker for the incident.

“As a business owner, I know (and you should, too) that EVERY employee will leave at some point. Be the type of employer that employees leave on good terms,” one user wrote. “It’s not difficult! But perhaps you really enjoy being the subject of lawsuits and PR disasters. It sounds to me that you’re far too immature to own a business. Step down and let someone else take the wheel.”

“A penny for your thoughts Miles,” another quipped. “I was just wondering how it feels to be sued for being such a miserable petty bully.”

We’ll update you as the suit progresses, unless you’d rather us spell out the details in filthy currency.