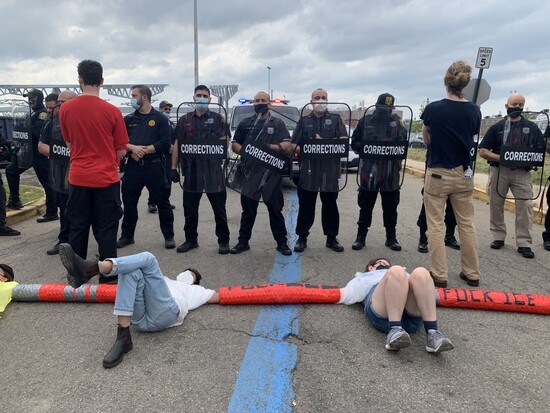 In images shared by advocacy groups, including Movimiento Cosecha, NYC ICE Watch, Abolish ICE NY/NJ, and Close the Camps NYC, four advocates could be seen linked together to physically block Hudson County Jail’s entrance. A number of advocates surrounded them. A line of law enforcement stood just feet away, at one point armed with riot gear despite the peaceful demonstration.

“Right now, several comrades are blocking the entrance to the Hudson County Jail. Why?” Movimiento Cosecha tweeted. “The jail’s ICE contract ends this month (bc of community pressure!) But instead of releasing  detainees back to their families, ICE is transferring them far away.” The organization notes that the state’s senators, Robert Menendez and Cory Booker, last month urged to release certain immigrants rather than just shuffling them off elsewhere. “And yet transfers are continuing, wreaking havoc in the lives of people in detention and their loved ones,” Movimiento Cosecha continued.

Among those still detained at Hudson County is Daniel Jones, a Jamaican immigrant who has lived in the U.S. for three decades. “No matter how hard we try to show ICE that they have a choice to either keep us here through a pandemic or release us back to our families and children where they need us, they sadly continue to choose money over our lives,” he told Movimiento Cosecha.

Organizers told northJersey.com that no demonstrators were arrested on Saturday, “but they said they received harsh language from the officers while holding the blockade for more than three hours.” Officers also lied to advocates, at one point claiming to them that no one was left at the jail. But one advocate “said that was incorrect because some of the protestors called their family members inside to confirm that people on ICE holds were still there,” the report said.

Groups said in a joint statement that “[m]any undocumented people held in ICE detention in New Jersey are longtime residents of NJ and NY who have families, communities, homes, and jobs to return to. Activists say ICE has the authority to release people from detention on parole, on bond, or into community-based alternatives to detention rather than transfer them, but chooses not to.”

”Lucrative contracts with ICE award up to $120 per head to participating prisons,” the groups continued. “Now with the ICE contracts ending in New Jersey, facilities in faraway states will continue profiting off each person who is transferred. While prisons profit, people suffer.”

In a major victory for immigrants and their advocates, Hudson County said last month that it would stop detaining immigrants for ICE. The immigration agency then had one remaining county jail in New Jersey, until another vote earlier this month ended that contract. “Three counties in New Jersey had held immigrants in their county jails, but Bergen is now the last county to announce it will halt this practice,” Documented reported. In a statewide victory, Gov. Phil Murphy this past summer signed a law banning new contracts, and the renewal of existing contracts. But ending the contracts has been just one battle. The next is freeing people from ICE’s grip.

“What is happening here is double jeopardy,” Jones said in the joint statement. “No matter how hard we try to show ICE that they have a choice to either keep us here through a pandemic or release us back to our families and children where they need us, they sadly continue to choose money over our lives.”