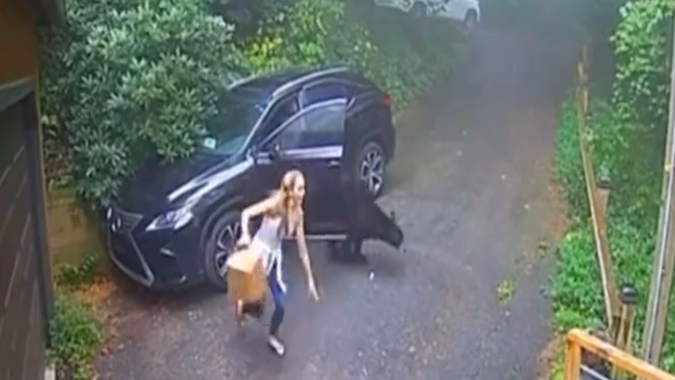 When most people go home and park their car in their driveway, they’ll lock it for extra safety precautions so that no one can break in or steal anything.

Usually not on the list of potential carjackers? Giant black bears.

This was the case for one woman in a video that has since gone viral on Twitter who found an unlikely guest sitting in the driver’s seat upon walking up to the front door of her car.

Related: Teenager Goes Viral After Fighting Off Giant Bear to Save Family Dogs

The clip, presumably taken from security footage at the woman’s home, shows the woman walking towards a black Lexus SUV in her driveway while carrying a picnic basket.

As she approaches the open door and peers inside, she jumps back and attempts to close the door shut in a frantic frenzy, trying to jam it shet several more times before bolting back to the house and dropping the basket, leaving a trail of apples behind over muffled screams.

She gave the bear the Lexus  pic.twitter.com/KtjYixgkws

As she runs away, the black bear can be seen leaping out of the front seat of the car and running in the opposite direction before turning around and walking slowly back in the driveway and towards the picnic basket.

The nearly unbelievable clip has been viewed over 4.7 million times and received over 31,500 retweets.

“She gave the bear the Lexus,” Twitter user @ijayt205, who posted the clip joked, alongside several crying laughing emojis.

“The fact she tried to trap him in HER car,” Twitter user @SomaKazima pointed out.

“The fact she was still screaming tho off camera and the bear wasn’t even chasing her,” Skeeter Jay said. “But she was OUTTA there.”

The woman in the video and the location of her home have not been publicly identified.

The video is reminiscent of another viral video from earlier this summer where a teenage girl fought off a bear that was trying to enter her home and attack her dogs.

It is estimated that there are around 40 bear attacks around the world each year, with 23 reported fatal attacks by black bears on humans from 2000-2016.

Related: Why the ‘Save Ralph’ short went viral