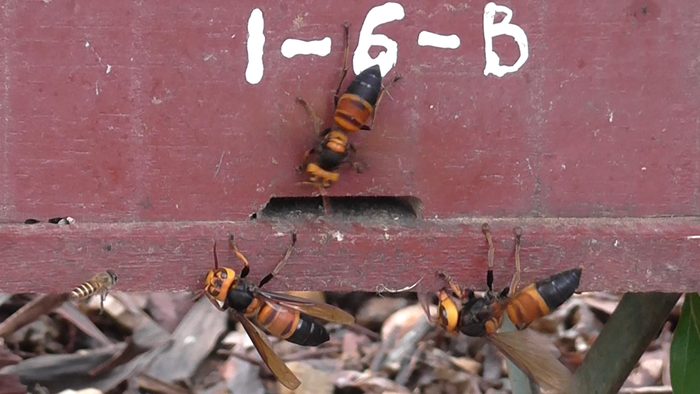 When attacked by giant “murder hornets”, Asian honeybees (Apis cerana) sent out a unique alarm to warn other members of their hive, according to researchers from the Wellesley College.

In a paper published in the journal Royal Society Open Science, the researchers have revealed that the Asian honeybees produce a signal, dubbed the “anti-predator pipe”.

Giant hornets (Vespa soror), often called “murder hornets” for their ability to wipe out entire colonies of bees are a serious threat. Researchers observed honeybees that were threatened by giant hornets sound the alarm to warn fellow hive members.

Researchers say bees make the alarm sounds, particularly the “antipredator pipes”, at a frenetic pace while the hornets are directly outside their hives.

“The pipes share traits in common with a lot of mammalian alarm signals, so like a mammal hearing them, there’s something that is instantly recognizable as communicating danger,” Heather Mattila, lead author of the paper and an associate professor of biological sciences at Wellesley college said in a press release. “It feels like a universal experience.”

Researchers say these distress signals are different from the sounds observed in honeybee colonies previously, which include “stop signals” and distinct “hisses”. They say these signals are irregular and much harsher.

“This research shows how amazingly complex signals produced by Asian hive bees can be,” Gard Otis, a professor emeritus in the School of Environmental Sciences, who was not part of the study, said in the press release. “We feel like we have only grazed the surface of understanding their communication. There’s a lot more to be learned.”