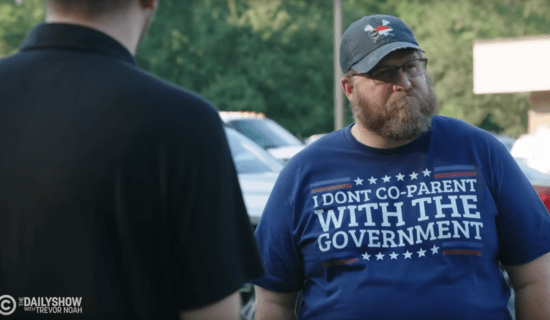 While parents in North Carolina really want their kids to go back to school, they also seem to want to believe mask requirements—used to mitigate the spread and exposure to COVID-19—are a hill too high and would rather literally die on that hill. And their do-nothing elected officials like Rep. Madison Cawthorn have used these school board meetings to pretend to care about “parents’ rights.”

Klepper asks a man at the rally, wearing the shirt shown here, that if his child is going to a public school, “Isn’t that kinda like co-parenting with the government?” When Klepper points that out to another parent, they admit that “in that regard, yeah. If you want to say that my taxes pay for that, then yeah.” To which Klepper responds, giving this proud patriot the benefit of the doubt, “But you’re giving them back your child tax credit. So…” It doesn’t look like this fellow has thought any of this out.

Another woman says that her “child was suffering” after wearing the mask “for so long.” When pressed to expound on this claim, she said her child had acne from the skin “not being able to breathe.” Klepper asks whether or not her child has had COVID-19. No, no he has not. As with most of the people trying to formulate an argument for why they are being irrational, Klepper does the only thing you can do; he repeats back to this parent what she has just told him: While wearing a mask, her child has not caught COVID-19.

Another woman explains that the problem with masks is that “you are breathing in the toxins that your body is trying to get rid of.” This is a debunked idea. Here’s the Mayo Clinic’s explanation: “For many years, health care providers have worn masks for extended periods of time with no adverse health reactions. The CDC recommends wearing cloth masks while in public, and this option is very breathable. There is no risk of hypoxia, which is lower oxygen levels, in healthy adults. Carbon dioxide will freely diffuse through your mask as you breathe.” Of course, the MAGA-head has a little more serious standards for scientific data than the Mayo Clinic, telling Klepper, “I challenge anybody to put a mask on and, five minutes later, smell that funk and think it’s good for them.”

As an aside: Part of the infrastructure deal is President Biden’s plan to extend Medicare coverage to include vision and dental.

Klepper goes on to highlight how these rallies are usually an “airing of general grievances.” Issues like Critical Race Theory (CRT) are hot-button issues with these folks. One American patriot who claims to have walked through North Carolina ICUs, filmed, and seen that they really weren’t filled with people who had COVID-19, also believes that CRT is the problem. This exchange followed.

KLEPPER: “And here in North Carolina, they don’t need to learn about racism in school?”

RALLY ATTENDEE: “No. Where are they gonna learn about racism mostly?”

KLEPPER: “Walking past one of the tobacco fields?”

North Carolina, like many Conservative-controlled states, has seen surging numbers of delta variant COVID-19 cases. Thursday, Scotts Ridge Elementary School in Apex, North Carolina, announced it had lost fourth-grade teacher and married mother of four, Merridith Mongone, to COVID-19. Mongone’s death comes at the same time the Wake County school system (as well as many others across the state and country) debates whether to require vaccinations of their employees.

On Tuesday, the Wake County school system shared a survey of district employees that shows close to 90% say they have received the COVID vaccine or plan to do so.

Enjoy laughing and crying at the comic tragedy in North Carolina.

California synagogue shooter gets life sentence; you might be surprised by why he hates Jews