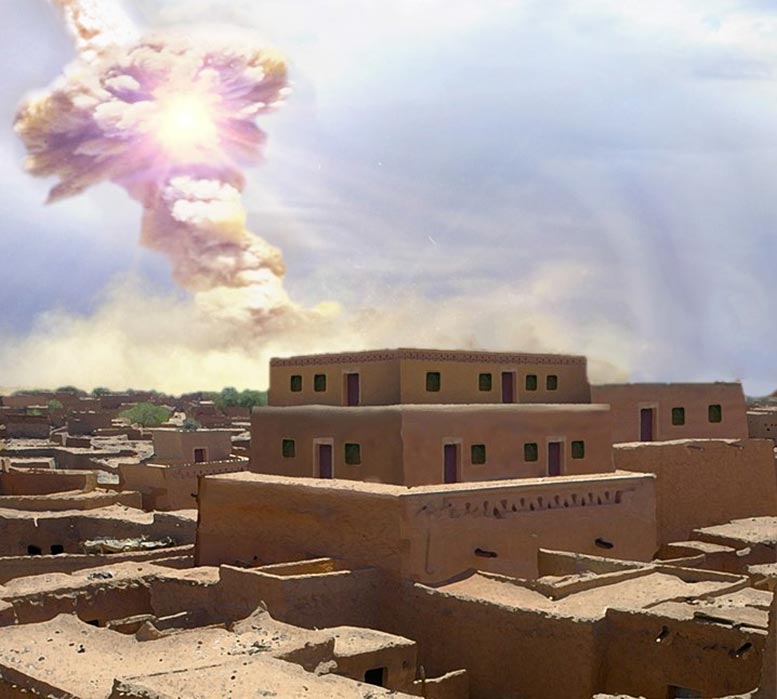 Tall el-Hammam, located in the southern Jordan Valley, in the middle east was destroyed in a “cosmic blast” over 1,000 times as powerful as the atomic bomb dropped on Hiroshima.

The asteroid, traveling at speeds over 61,000 kph started to burn up after entering the atmosphere, and exploded in a cosmic blast at an altitude of four kilometers above the ancient city, causing a “hellish fireball”.

Atmospheric temperatures soared to over 2000 °C, melting metal and clay, burning wood and clothing, and instantly vaporizing human flesh. A few seconds later, a shockwave traveling at over 1200 kph smashed into the city, flattening most buildings.

Over 8,000 people, along with all the animals in the city at the time are estimated to have perished from the blast.

Published in the journal Nature, the study was a collaborative effort between an international team of archaeologists, cosmic-impact experts, geologists, geochemists, geomorphologists, mineralogists, medial doctors palaeobotanists, and sedimentologists.

In 2005, when the site of the ancient city was first excavated a roughly 1.5 meter layer of ash, charcoal, and melted mud bricks and pottery were discovered. The cause of such destruction could only have been an intense fire, yet there wasn’t much clue as to the cause of the fire.

Researchers quickly ruled out the possibilities of it being caused by an earthquake, a volcano, or even warfare, as none could cause a fire intense enough to melt pottery.

Using an impact calculator, a tool to model scenarios using available evidence, the researchers identified the cause of the intense fire – an asteroid smaller than the one that instantly wiped out over 80 million trees in Siberia in 1908.