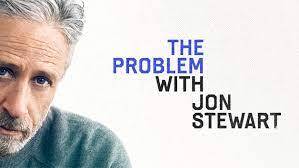 “Yesterday the FDA authorized Pfizer booster shots for Americans 65 and older. Along with seniors, the agency okayed boosters for those in workplaces with high exposure risk, and those with high-risk conditions. Y’know, like diabetes or living in Florida.”
—Stephen Colbert

“Many people are still resisting the covid vaccine in favor of the paste they use to de-worm horses, so much so that horse owners are having trouble finding it. One feed store in Las Vegas had to post this sign: ‘Ivermectin will only be sold to horse owners—must show pic of you and your horse.’ Can you imagine? You won’t go to Walgreen’s to get a free vaccine, but you’ll spend four hours photoshopping your body onto a Clydesdale. And you know who’s loving this the most? The horse worms.”
—Jimmy Kimmel

“It’s a busy time in new York City, because the U.N. General Assembly is underway. President Biden talked about the pandemic, climate change, and the withdrawal from Afghanistan. When he watched, former President Trump was like, Pfft—I got way more laughs than that.”
—Jimmy Fallon

And since this year’s Emmy Awards were such a snoozer, here’s a bit from last year’s virtual event that still resonates:

Percent of new coronavirus infections reported last week that were among children, most of them in the south: 26%

Percent of United Airlines employees who are now vaccinated: 97%

Percent of Americans polled by Monmouth University who believe it’s okay for private citizens to receive a $10,000 bounty for successfully filing a lawsuit against someone who had, or helped someone have, an abortion: 14%

Year that, in Berlin, aggressive sitting became a sport: 2008

CHEERS to kissing each cheek twice and making up. After U.S. President Joe Biden went sneaking behind France’s back to something something a nuclear submarine deal with British Prime Minister Benny Hill and Australian leader Crocodile Dundee, French President Pepe LePew went ballistic, recalling his ambassador from D.C., but not before farting in his general direction, changing the name of American cheese to “freedom cheese” in the Parlement Francais cafeteria, and claiming Biden’s mother was a hamster and his father smelt of elderberries. It got ugly! Thankfully, everyone took a deep breath and/or droll puff on a cigarette, and cooler heads prevailed:

President Biden and French President Emmanuel Macron spoke by phone on Wednesday about the rift between the longtime allies over a new defense partnership in the Indo-Pacific region. The two leaders agreed to meet in person in Europe at the end of October, and Macron agreed to send the French ambassador back to Washington, D.C., for more talks.

On the recent row, “The two leaders agreed that the situation would have benefitted from open consultations among allies on matters of strategic interest to France and our European partners. President Biden conveyed his ongoing commitment in that regard,” they said in an unusually descriptive joint statement about the call, which the statement said Biden had requested.

JEERS to bad medicine. Big news out of Florida this week, as Governor Ron DeSantis welcomed his new surgeon general, whose job is to grab that dastardly old coronavirus by the lapels and wrestle it into submission. The first brilliant act of Doctor—repeat, Doctor—Joseph Ladapo: allowing students exposed to the virus to keep on canoodling and cavorting with their fellow students in their airless, cramped classrooms. And that’s just for starters. Next week, a slate of new rules will be announced, but you can read them here first because C&J got hold of a leaked copy this morning:

»  All references to the virus must be referred to as “Democrat Hoax-19.”

»  Any news report that includes a clip of Dr. Anthony Fauci saying something must be over-dubbed with a reporter going “Blah blah blah blah blah…” after sucking on helium.

»  All covid tests will now be loaded into a SpaceX Dragon capsule and shot into space from Cape Canaveral, whereupon health officials will await the results from God.

»  Masks can only be worn as bikini bottoms and must now be referred to as “thongs.”

» Firearms may discharged to “stand your ground” against the virus if you sense it is less than 500 yards from your person. Or more than 500 yards, let’s not get hung up on details.

»  Everyone must now die of causes other than Covid-19 or face a minimum of five years in prison and a $10,000 fine that will be deposited into the DeSantis reelection fund.

»  The Disney Corporation will, of course, remain exempt from all rules and regulations.

Godspeed, Florida. We’re all counting on you.

CHEERS to the Environment President. On this date in 1906, Theodore Roosevelt signed a bill designating Devils Tower—that kewl rock formation in Wyoming made famous in Close Encounters of the Third Kind—as the country’s first National Monument.  Some people call it America‘s national nipple:

Fair warning: don’t tickle it or you’ll start an earthquake.

JEERS to close calls. Sixty-six years ago this week, in 1955, stocks dropped like a rock…the fastest rate since 1929.  The numbers sound positively quaint today:

CHEERS to home vegetation. Here’s some of the stuff that may or may not be flickering on your teevee screen this weekend. Chris Hayes and Rachel Maddow are required viewing, but not before watching Wheel of Fortune and Jeopardy! for the former’s blood pressure-lowering clackity-clacks and the latter’s…what’s the word…facts. On HBO’s Real Time at 10, Bill Maher talks with Jennifer Rubin, Tristan Harris of the Center for Humane Technology, and Richard Ojeda of No Dem Left Behind. And at 11 on BBC America—in between airings of Spaceballs—there’s a new Graham Norton Show, with guests including Amy Poehler, Tom Jones, and Octavia Spencer.

The most popular home videos, new and old, are all reviewed here at Rotten Tomatoes. The NFL schedule is here. The WNBA schedule is here, and the baseball lineup is here. If you’re a fan of the spoon and mashie, the Ryder Cup airs this weekend on NBC, and all I have to say is U-S-A! U-S-A! U-S-A!

Busy Sunday ahead. On 60 Minutes: a world-record dive attempt in the Bahamas and an interview with Jan. 6 committee co-chair Liz Cheney, and a new weapon for fighting wildfires at night. The 326th season of The Simpsons starts Sunday with Marge staging a revival of her favorite high school show that gets jinxed by a former rival, and on the 188th season premiere of Family Guy, Lois exploits her new LASIK surgery for monetary gain. From 9-11 CBS airs a “celebration of Broadway’s return to live theater.” Then, hot off his Emmy win, John Oliver roars back to HBO Sunday night at 11 with a fresh episode of Last Week Tonight.

JEERS to the circle of wankery. So let’s quickly recap the Republican presidential front-runner status to this point:

And now? Thanks to the Florida Straw Poll results, it appears Republicans are back in love with Herman Cain. Never underestimate the power of free double cheese.

CHEERS to the day the Straight Talk Express jumped the tracks.  It happened twelve years ago, and it’s become a high holy day on the American political calendar ever since.  It started when John McCain—back in his evil Iraq War-flogging days—“suspended” his presidential campaign so he could ride to Washington on a white stallion to stop the economic collapse that happened on his party’s watch, a much-mocked effort that consisted of a perfunctory appearance at the Bush White House. But that half-baked stunt quickly faded into the background when, with Keith Olbermann sitting beside him as a witness to history, David Letterman delivered the coup de grâce after catching McCain in a pasty-faced lie:

Barack Obama went on to successfully navigate eight years in the Oval Office, and McCain did not.  So thank you, Dave, for being so quick that night.  But more important: Thank you, John, wherever you are, for being so slow.

Oh, and a reminder that tomorrow is National Lobster Day. To make it especially memorable, breed them in your basement with radioactive isotopes until 40 feet tall and then unleash them on an unsuspecting populace.  Add a funny hat or water-squirting boutonnière if desired. Get creative! Floor’s open…What are you cheering and jeering about today?