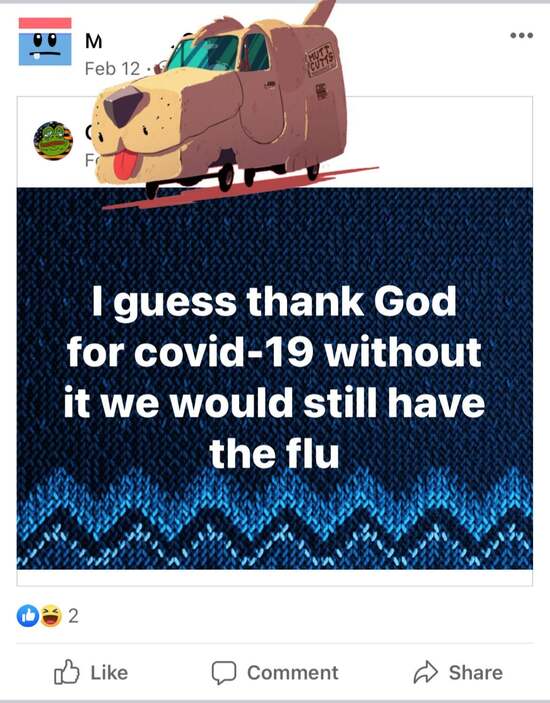 Meet Michael Yeadon, the source of the unfounded allegations that the mRNA vaccines cause infertility (among other disinformation).

What gave the debunked claim credibility was that one of the petition’s co-authors, Michael Yeadon, wasn’t just any scientist. The 60-year-old is a former vice president of Pfizer, where he spent 16 years as an allergy and respiratory researcher. He later co-founded a biotech firm that the Swiss drugmaker Novartis purchased for at least $325 million.

He is quite the respiratory expert, too: “In October, Yeadon wrote a column for the United Kingdom’s Daily Mail newspaper that also appeared on MailOnline, one of the world’s most-visited news websites. It declared that deaths caused by COVID-19, which then totaled about 45,000 in Britain, will soon ‘fizzle out’ and Britons ‘should immediately be allowed to resume normal life.’ Since then, the disease has killed about another 80,000 people in the UK.”

Umm. You can still get pregnant with any contraceptive. In fact, the most effective option outside of tubal ligation is an IUD, which is “only” 99% effective in preventing pregnancy. So yeah, not that stupid.

And even if a woman is on contraceptives, wearing a condom still protects against transmissible diseases.

So, it’s extra not stupid.

Also, there is a contraceptive “vaccine.” Depo-Provera, a quarterly injection that prevents pregnancy. That shot, along with condoms, is a great way to avoid pregnancy and sexually transmitted infections.

Fact check: obviously false. I was going to excerpt some of that fact check, but it’s so good, and I learned so much from it, that I’d rather you guys click through and read it in its entirety.

99.95% is objectively wrong. 700,000 Americans have already died of the disease, or 99.8% of all Americans, or one in every 500. The percentage is now skewed toward rural areas, where the COVID death toll is twice the rate of that in urban America. So in red America, which is suffering the brunt of this current COVID wave, the death toll is much higher.

Yet, even if that original number was true, and “only” around 165,000 Americans would die from COVID, how was that number in any way acceptable? What’s wrong with these people, especially since they spent years hyperventilating over Benghazi?

Oh, the Gateway Pundit, home of Jim Hoft, the dumbest man in politics, bar none. (And there’s so much competition!)

Let me find that face-slap emoji …

I don’t understand this idea that “God is in control,” yet people have to pray to get this god to do anything, and that more prayers increase the chance of success, and how this god is always good, whether the subject of said prayers lives or dies.

It’s always tough to be reminded how horrid a critical COVID illness can be. This isn’t a peaceful disease, where you silently slip away. COVID patients struggle on ventilators, plugged into multiple machines trying to keep various organs from shutting down. They have to be sedated to even handle the tube shoved down their throats. Here’s a meme that should be getting wider distribution:

But no, that’s not the one making the rounds. Instead, they cry about “face diapers.”

Good news: She couldn’t find any lawyers to take the case.

If her all-powerful mighty god existed, as she perceives it, wouldn’t this god have a role in guiding scientists toward a life-saving vaccine? And wouldn’t this god guide public policymakers to freely distribute this vaccine to all who needed it, regardless of financial ability?

(Not to mention, if this god were as good as they like to claim, wouldn’t it have … avoided this plague in the first place?)

Instead, she thinks her god needs to help her find a lawyer.

God bless the medical professionals who have to deal with this shit every day—family members who “did their own research” on the internet trying to tell them how to do their jobs. I don’t know how they do it.

“Not getting very good care at all.” Infuriating, isn’t it?

Oh look, sis took a break from praying for a lawyer in order to post this shit.

You know what else loses “customers”? DEATH.

You know what increases “customers”? A refusal to take the vaccine.

She found herself two quack lawyers. PRAISE GOD. Now she needs to find a quack doctor to fill a bullshit prescription. Meanwhile, overwhelmed doctors and nurses are fighting to keep M alive, despite his utter disregard for life-saving precautions.

“He hears every prayer.” Well, every prayer from M’s family and friends and random Facebook connections were for M to live. So their god heard all these prayers, and then decided to off him anyway? And did so after a month of torture in a hospital bed? That is twisted.

It wasn’t a “sudden illness.” It was a pandemic that has been around for over a year and a half. It was a pandemic that had plenty of countermeasures, including a life-saving free vaccine and masks. M passed away because he thought he’d never be in the “small” percentage of people who could die from the disease, and dramatically increased the odds that he himself would suffer from his irresponsible behavior.

And fine, he made his choices, and he suffers the consequences. Except that it doesn’t work that way.

His teenage son just lost a dad. I don’t care who you are and what you believe politically, I’ll never think this is okay. Kids should have loving parents.

His hospital lost a bed it could’ve used to treat someone who wasn’t being COVID stupid. It sucked up resources that the rest of us are going to end up subsidizing because he didn’t cover his full cost, even if he had medical insurance (and what are the odds that he did?). We subsidize it either through taxes or through higher health insurance premiums next year. The insurance companies aren’t in the business of losing money.

Overworked and overstressed hospital staff had to care for him for over a month, adding to an impossible workload. And on top of that, his sister added to their burden with her frivolous legal threats and ridiculous medical demands.

His community is being asked to subsidize his financial negligence by sending money to his survivors because he didn’t care enough about them to ensure their security in case of his own death.

And finally, M has prolonged a pandemic that should’ve been under control months ago. ALL OF US want this shit done so we can get back to some semblance of normalcy. And that’s never going to happen as long as people like M continue to thumb their noses at the vaccine and masks.