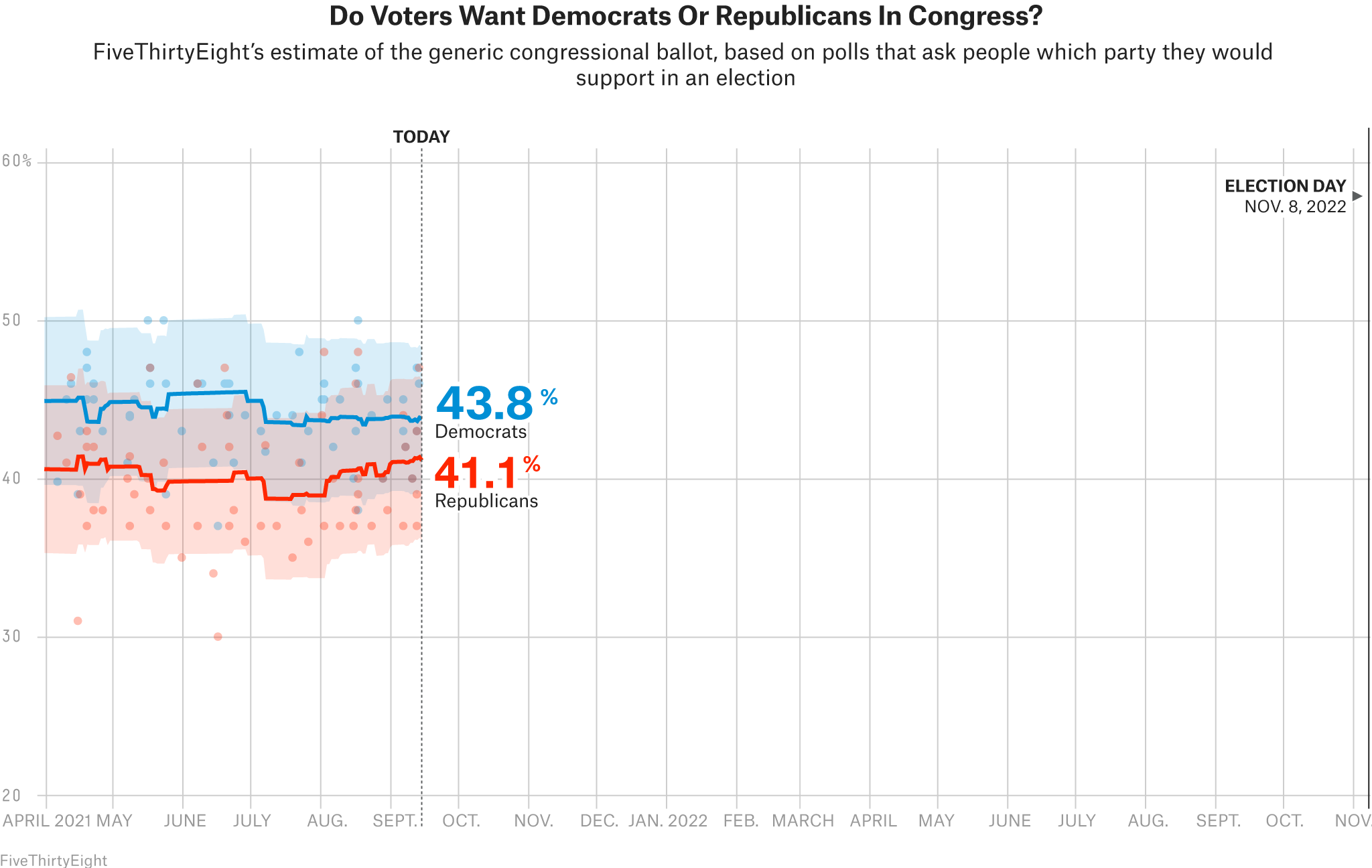 As it is every two years, control of the House and Senate will once again be at stake in the November 2022 midterm elections, and one of the best tools we have for predicting those election results is polling of the generic congressional ballot. The generic congressional ballot question typically asks respondents which party they intend to vote for in the upcoming congressional election, without naming specific candidates — allowing the question to be asked nationally to gauge the overall political environment. And for several years now, we at FiveThirtyEight have been collecting these polls and calculating a weighted average for them, and we’re excited today to publish our generic ballot average for the 2022 election cycle.

As of Thursday, Sept. 16, Democrats lead Republicans in our polling average by 2.7 percentage points (43.8 percent to 41.1 percent). This average is calculated much the same way as our presidential approval-rating average, with a couple of differences. First, the lines we draw for the generic-ballot averages are more aggressively smoothed; in other words, they are slower to respond to new data. (Because generic-ballot polls are less common than presidential-approval polls, we’ve found that, to filter out noise, the generic-ballot average needs to incorporate a larger sample of polls stretching further back in time than the presidential-approval average.) Second, while our presidential-approval average prefers the versions of polls that survey the widest universe (i.e., all adults over registered voters, and registered voters over likely voters), our generic-ballot average does the opposite. This is because, while we’re interested in knowing what all Americans think about the president, generic-ballot polls are fundamentally election polls — and we’re interested only in how actual voters are going to vote in the midterms.

Yes, as you might recall, generic-ballot polls misled in the 2020 election: They gave Democrats an average lead of 7.3 points on Nov. 3, but the party won the House popular vote by only 3.0 points. But that was an unusually large polling error by recent historical standards. In fact, from 2008 to 2018, the average error of our retroactive Election Day generic-ballot polling averages was just 1.3 points. So, 2020 aside, final generic-ballot polls have been remarkably accurate in recent years.

Of course, that’s only an argument to pay attention to our generic-ballot average on Nov. 8, 2022 — not necessarily today. But it turns out that early generic-ballot polls can be predictive too — if you know how to interpret them. Specifically, for midterm elections, you have to take into account which party holds the White House, since that party is at a natural disadvantage in midterm elections.

What 3 upcoming elections can tell us about the political climate

The table below compares our retroactive generic-ballot polling averages as of Sept. 16 the year before a midterm election with the eventual House popular vote margin in the 1982-2018 midterms. It shows that the president’s party usually loses ground between this point in the cycle and the actual election.

Specifically, the generic-ballot polling average the previous September overestimates the president’s party’s vote margin by an average of 3.5 points. This is the manifestation of one of the most ironclad rules in politics: The party that holds the White House almost always performs poorly in the midterms.

Sure, there have been some exceptions. Most notable is the 2002 cycle, when then-President George W. Bush’s Republicans trailed in early generic-ballot polls by 6.7 points but wound up winning the House popular vote by 4.6 points. But that year was, well, exceptional: A rally-around-the-flag effect in the wake of the Sept. 11, 2001, attacks made Bush incredibly popular, and those good feelings rubbed off on his party. The 2006 and 2018 cycles were also exceptions in that the president’s party neither lost nor gained significant ground between the polls and actual results; early generic-ballot polls nailed the final margin almost exactly. But in both those years, the early polls already pointed toward a bad year for the president’s party, showing Bush’s and then-President Donald Trump’s Republicans down by 8.0 and 8.3 points, respectively.

In years when the president’s party leads the generic-ballot polling average the September before the midterms, the party underperforms those polls by an average of 9.3 points. And that, in a nutshell, is why Democrats should be concerned about the 2022 elections despite their current lead on the generic ballot. This cycle so far looks a lot like former President Barack Obama’s two midterms (2010 and 2014) did for Democrats in that they lead generic-ballot polls by a few points in the September of the year before the election. But in both those years, Republicans eventually moved ahead in our generic-ballot polling average and won the election handily.

So, if Republicans outperform their early polling to a similar degree as they did in 2010 and 2014, they could win the House popular vote by 5 to 7 percentage points, which would very likely hand them control of the House (and probably the Senate too, since almost everyone votes a straight party-line ticket these days). Of course, though, that’s a big if; there has been a lot of variability in these historical trends, so a wide range of outcomes is still possible. But even if Republicans only improve their standing a little bit — something that is likely to happen, if history is any guide — it would probably still be enough to flip the House, considering that their control of the redistricting process in a plurality of states is likely to reinforce the GOP’s structural advantage in House races. Past trends don’t always hold true, but the smart money, at this point, remains on the president’s party losing control of Congress next year.