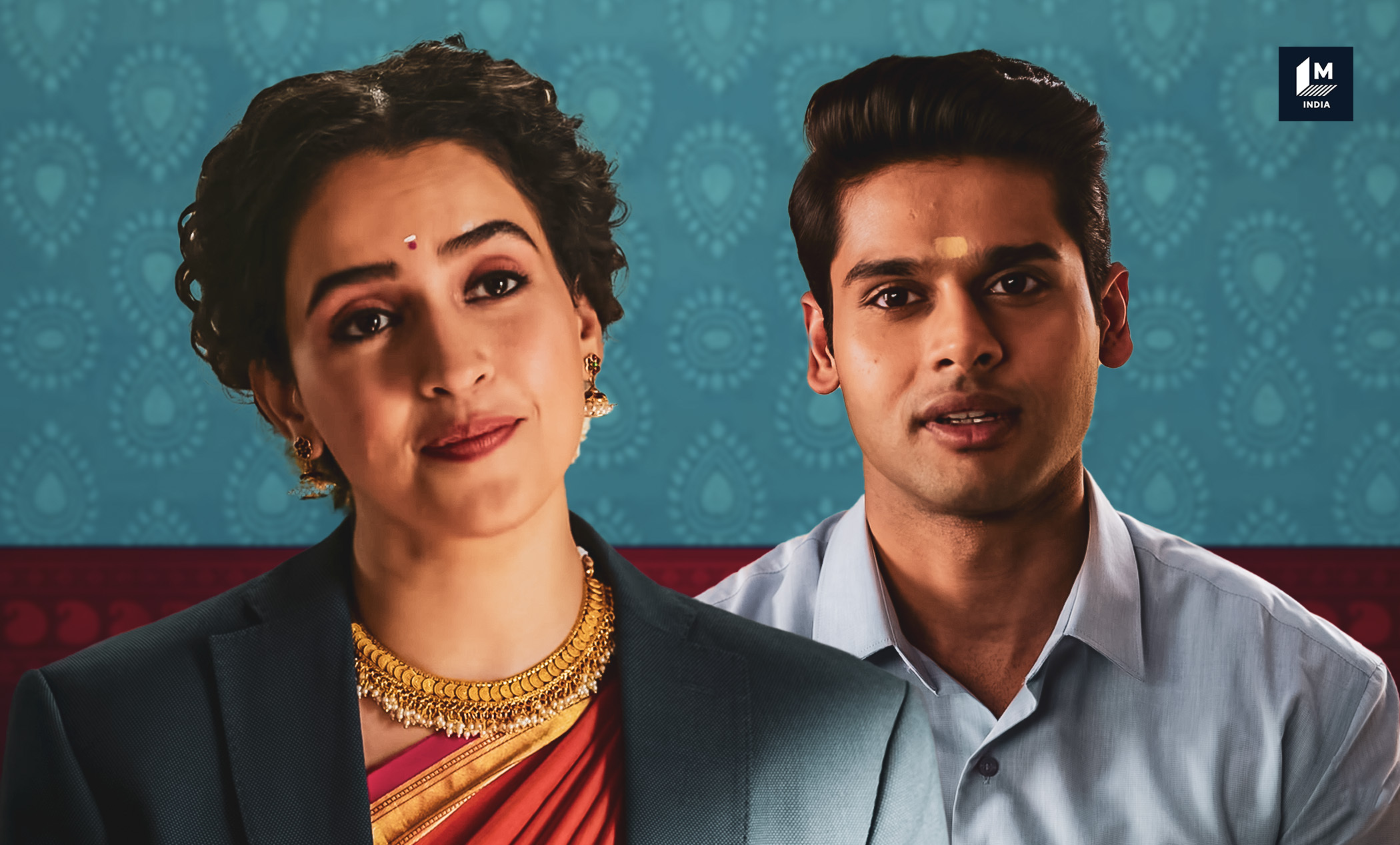 Meenakshi Sundareshwar starring Sanya Malhotra, Abhimanyu Dassani has found itself in the eye of the storm. Again. After upsetting and offending South Indian viewers, especially the Tamil populace with its tokenistic representation in the teaser and trailer, it seems like the makers didn’t bother to run a quality test. Because the film is here after releasing on November 5 and it’s worse. Set in Madurai, the story is about two an arranged-marriage couple who juggle long distance relationship and an impractical conflict. And while at it, it harps on many stereotypes that mainstream cinema has infamously packaged for North-centric cinemagoers over the ages.

Not just that it also appropriates Tamil culture with fluent Hindi-speaking actors and a script that thinks five Tamil phrases sprinkled around will do the job. Even though almost all the pivotal characters in the film are Tamil. That and Rajinikant worship which one would have put up with if they bothered to spell Thalaiva’s name the right way.

Needless to say, Twitter is livid and frustrated for the above-mentioned reasons and are expressing their disappointment about the film that wastes it actors and the opportunity to cast Tamil actors for the part. See for yourself.

If someone calls themselves a #Rajinikanth fan but spells his name like this, singa nadai pottu avanga kittenthu escape agidunga!#MeenakshiSundareshwar pic.twitter.com/Nopw5vuqLK

#MeenakshiSundareshwar Horrible Experience. I am from Madurai and this movie doesn’t even show 1% of my city. Its really pathetic to hear Hindi in madurai which is unknown to 99% of people and looks unrealistic. This movie neither showcase our Tamil culture nor Madurai tradition pic.twitter.com/ivlWqxfwPb

One day, when I become a director, l will make a true universal film about REAL Tamil culture. I’ll consider that a duty as a partly Tamil, partly Hindi guy. This film doesn’t even offend very well. It’s a joke on all fronts.

I don’t understand why actors from #Bollywood were cast for @NetflixIndia‘s #MeenakshiSundareshwar. If the film revolves around South Indian culture, should it not have actors who know it? For this to come from @karanjohar‘s @Dharmatic_ is sheer disgrace! Disappointing
(1/2) pic.twitter.com/CGMrXVvIKG

#MeenakshiSundareshwar confuses me more than anything else Beautifully shot with such a soulful soundtrack. #SanyaMalhotra in brilliant form

But a Tamil Brahmin family in Madurai speaking shudh Hindi. Stereotypes galore. Slow pace. Odd Tangents in the storyline. What did u think pic.twitter.com/AqhMoErKzS

One of many cringe scenes in #MeenakshiSundareshwar.

Every other fooker in TN is an engineering graduate and if they never gave up they’ll be no one running restaurants, running sari shops, driving autos, no temple undiyal thefts etc. Tasmacs would also be out of business. https://t.co/mylOp0Jc8q pic.twitter.com/ARqCYueLmA

The producers of #MeenakshiSundareshwar to the actors: Ok it’s in Hindi. You don’t need to know anything about tamil culture or language, just say these 5 tamil phrases repeated throughout the movie so it feels authentic. Oh, you can’t pronounce them? Who cares, you got the job!

@karanjohar @DharmaMovies @SonniVivek
1. We dont wear Sandal Paste always on our foreheads (We have Vibhuti)
2. We don’t do romance inside Temples which is sacred
3. We don’t lift bridegrooms in marriages!
4. Not everyone is a die-hard Rajini fan!
I am a big fan on MGR!!

Dear Bollywood,
For fucks sake, can you stop making movies based on Tamilians or any south Indians for that matter? If you can’t freaking do it the right way don’t do it man! We have had enough of your stereotypical portrayal already! #MeenakshiSundareshwar

With the shameful failure to impose hindi in Tamilnadu,the makers of #MeenakshiSundareshwar have made a Tamil film with Hindi dialogues and have proved once again that they can’t force us to speak in hindi. Tamil people speaking hindi is a disastrous match.Just like the movie.

Bollywood filmmakers totally assume we’d break into a Rajnikanth’s dialogue at a cafe with plenty of people watching us. Yes, that’s exactly what we do! 🙄 #MeenakshiSundareshwar pic.twitter.com/WHrlNO04rK

This movie is such a crap. What u have shown in the movie is not our culture. Stop misleading people. If you really want to take movie about Tamil and our culture , go with tamil cast & director. Brahmin culture is not Tamilnadu. Majority, are meat eaters #MeenakshiSundareshwar pic.twitter.com/Hjskt8YPW0

Live tweet thread begins here!
(There’s a good chance I might abandon ship halfway. But we’ll try to power through)

And the stereotypes and the “south indian” aesthetic, god this film makes me so angry 😡

That excitement on Sanya Malhotra’s face is because she is watching Rajini’s ‘Darbar’.
Adei, @NetflixIndia fellows! Even the film’s director Muragadoss won’t buy that anyone was this excited to watch that snooze fest of a film. You & your attempts to tell namma south stories 😏 pic.twitter.com/Aoi116VyVY

Elam seri. But why is she so happy for Darbar, man?#MeenakshiSundareshwar

If you’re not in the know, Meenakshi Sundareshwar marks the digital debut of Dassani of Mard Ko Dard Nahi Hota and the directorial debut of Vivek Soni who has also co-written the film with Aarsh Vora. It is produced by Karan Johar’s Dharmatic Entertainment.

The filmmaker had recently addressed the noise around the film and had said that the film doesn’t stereotype Tamilians. Talking about the Rajinikant reference Soni was quoted saying, “I know there are a lot of great actors down south, like Ajith, Surya, Vijay, but for me personally, after MGR, there is no bigger superstar than Rajinikanth. He is my personal favourite, and that is the reason we chose Meenakshi to be a fan of Rajini sir as such.” He added, “Apart from that I don’t think there is any stereotyping in the film.”

“We have made a Hindi film set in the south, eventually it is a Hindi film. I could make a Tamil film, then it would become a regional film, which wouldn’t be a bad thing either because we have some fantastic films there. But, I essentially wanted to make a Hindi film. We could have kept an accent too, but we didn’t want to do that, because that would be stereotypical. We didn’t want to do that, because then it would look like we are making fun of the language. We have only used a few words to add flavour,” he added.

Unfortunately, that’s all there is in the film that tries too hard to be cute. Faint flavour just for the sake of aesthetics.