Any study – or creation – of an organization must take into account its corporate culture, since this determines its reason for being, its priorities, its restrictions and its destiny, among other fundamental issues.

Although corporate culture exists in all organizations and its construction is a dynamic process, you also have to take the time to put it in writing on a regular basis. Thus, once formalized, it can be shared with the institution’s main interest groups: shareholders, collaborators, clients, suppliers and the community in general.

The elements that make up the corporate culture have a systemic relationship that can be represented graphically as follows, where the referential components appear with dotted lines and the essential components with solid lines: 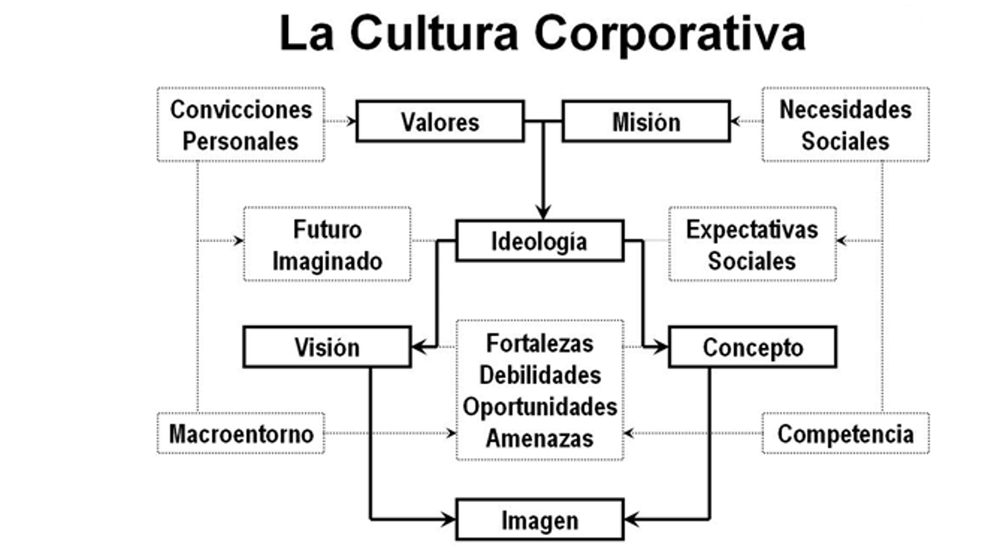 This diagram allows to carry out the adequate definition of the corporate culture of any human institution: from a family, a sports team or a small company, to the most important public or private multinational organization.

It is convenient to clarify that this methodology can be developed with a top-down or bottom-up logic, depending on the size of the institution, the time and budget available, and the leadership style. In the first case, the general director or the senior management team is in charge of solving the process and then communicating its result to the rest of the organization, while, in the second case, a participatory consultation is carried out from the lower levels, the which is synthesized upon reaching the higher levels.

Step 1. The definition of corporate culture must begin with the recognition of four referential components: personal convictions, social needs, competition and macro environment.

Step 2. Once the previous components have been identified, we will use them to specify two more referential components: imagined future and social expectations.

Step 3. Knowing our organization, in relation to its competition and macro environment, we are able to describe the last of the referential components known as SWOT: Strengths, Opportunities, Weaknesses and Threats.

Step 4. Values: based on personal convictions, we must make a list of a maximum of seven attributes that will be the guiding values of our organization, also known as principles or foundations.

Step 5. Mission: based on social needs, it is necessary to elaborate a statement that synthesizes the reason for being of our organization, also called purpose, which is recommended to include the experience that you want to provoke in the client, which is brief and begins with an infinitive verb, since it is something that will be done every day.

Step 6. Ideology: since values are a short list of words and the mission is a very short sentence, it is advisable to explain more broadly what these two essential components mean in our organization. This larger document may also be called a philosophy, creed, or code.

Step 7. Vision: by considering our ideology in the light of the imagined future and the SWOT referential component, we are in a position to determine the vision of our organization, that is, the dream, objective or long-term goal that should inspire our daily activity and that is expressed in a statement, and may or may not have a compliance date.

Step 8. Concept: derived from ideology, social expectations and the SWOT referential component, it is necessary to select a concept, that is, an idea that represents the main differentiating element from which we will seek our positioning in the mind of the consumer, which will later be disseminated through a slogan or slogan.

One last comment regarding the definition of corporate culture: the temporality of each of the essential components of the diagram, generally, is determined by their position in it; thus, the validity of the values and the mission –which are in the upper part–, must be greater than the validity of the image –which appears in the lower part–.