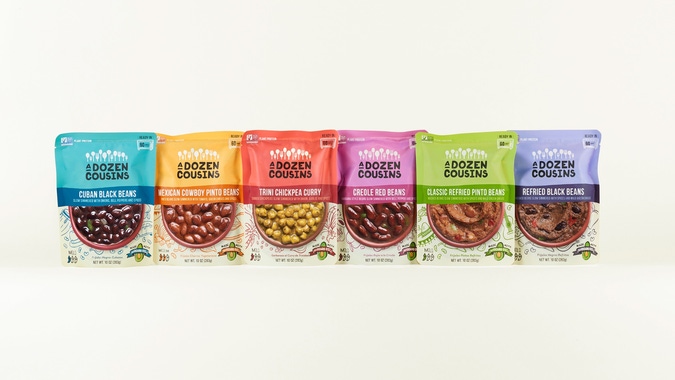 During the pandemic, my 8-year-old son has been struggling with wanting more independence. He wants to have sleepovers with friends, take walks on his own and start to make his own meals. Although the pandemic has restricted much of his independence, I’m happy to welcome more help in the kitchen and to reinforce healthy eating habits and introduce him to cooking.

During our recent culinary adventure of putting together a taco bar, we needed a number of key items. He helped make a list of cheese, lettuce, tomatoes, bell peppers and chicken. And we had to include one of the most important ingredients to make a best-in-class taco bar: black beans. For that, we turned to none other than A Dozen Cousins. 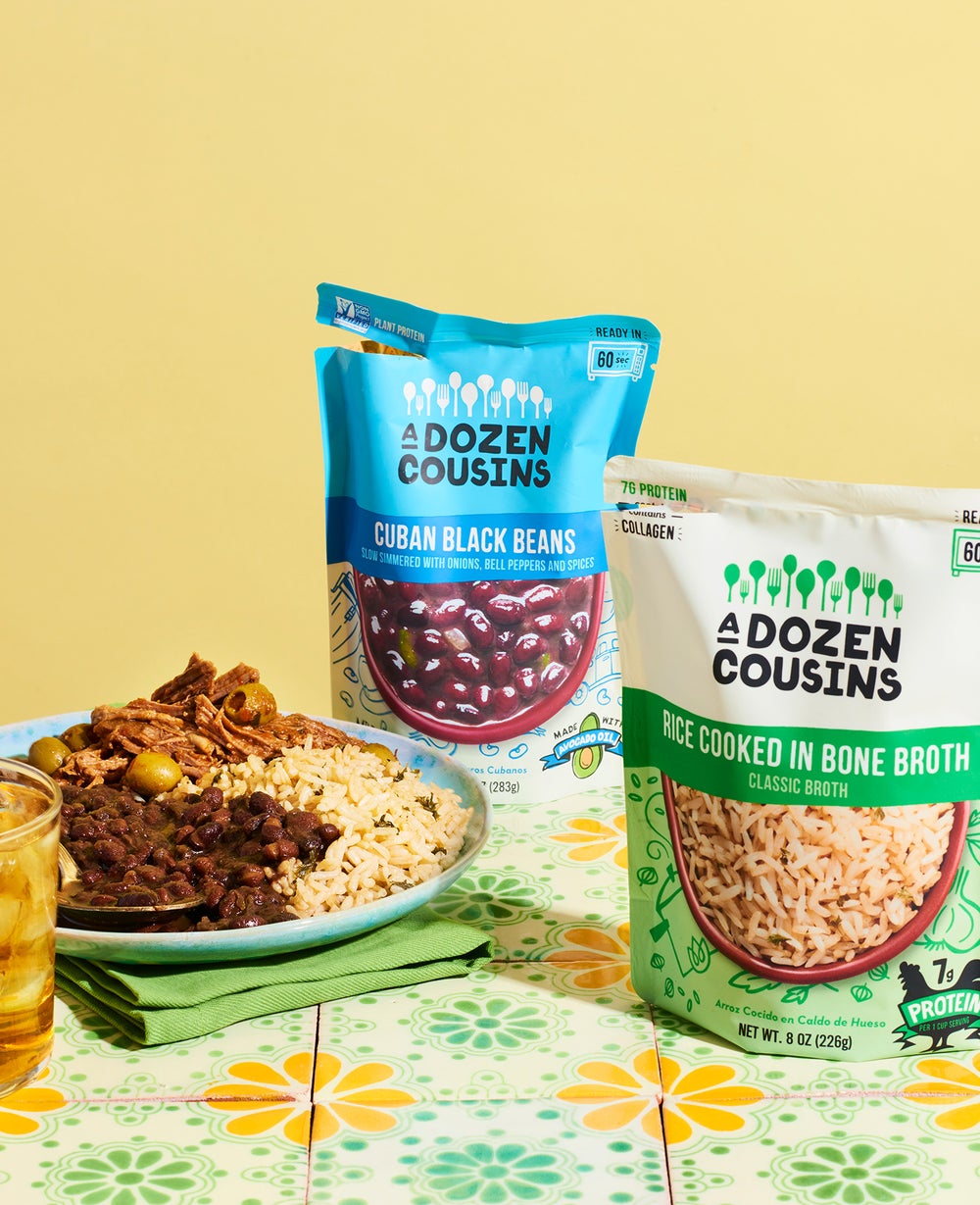 The Cuban Black Beans (slow simmered with onions, bell peppers, and spices) were easy for my son to warm in the microwave, and they were ready to be enjoyed in just a few minutes. With easy-to-recognize ingredients and labels like gluten free, non-GMO and vegan, making the beans became an opportunity for me to educate my son about the importance of what we put in our bodies.

“I have had my own journey of non-healthy and healthy eating,” says Ibraheem Basir, founder and CEO of A Dozen Cousins. “I wanted to build a company that was all about putting genuinely wholesome, bona fide good foods into our bodies, and to show people that clean and natural products like ours can be convenient and delicious.”

Related: This Entrepreneur Made a Splash in the $16 Billion Swimwear Market By Listening to Her Customers

When I Google “healthy eating” or “healthy foods,” the images I’m bombarded with are of avocados, salmon, blueberries, celery sticks and Caesar salad (go light on that dressing). Even as the proud daughter of Indian immigrant parents whose home was always filled with delicious and healthful Indian cuisine, I have been conflicted about what constitutes “healthy eating.” Growing up in the U.S., marketing messages always emphasized healthful foods through a Eurocentric lens. The lack of cultural representation in the food marketplace sends the message of what’s healthy and what’s not. A Dozen Cousins is on a mission to change that.

From a young age, Basir loved to cook and eat, and for as long as he can remember, he was drawn to the food industry. His imagination and creativity as a child would serve him well later in life, as he started his career working for industry titans including Unilever and General Mills. As he continued to build his career, he started to see the stark differences between how he experienced food as a child and how the food industry was built.

“I felt a very clear dichotomy between the natural, organic world that was focused on high-income, high-education, predominantly white consumers, where food was viewed as fuel and nutrition,” shares Basir. “This was in contrast to my own family and community, which was working class, ethnically diverse, and where food was a source of joy and connection to culture.”

Here are three lessons Basir shares on building a movement that’s at the intersection of taste, health and culture:

1. Pick a name with significance

“Growing up, our kitchen was a delicious melting pot of Creole, Caribbean, and Latin American cooking,” says Basir. “We were a big family, six sisters and three brothers, and food was the glue that helped us connect, celebrate and show love.”

The name A Dozen Cousins represents the movement Basir is creating. With his family central to his relationship with food, Basir wanted to pick a name that symbolized family and honored the inspiration for what he was building. “As a marketer, I also wanted to find a name that was easy to remember and share with others.”

When Basir started working on the idea for the brand, he had 11 nieces and nephews, and his first daughter had just been born, so the name fell perfectly into place. A Dozen Cousins was a tribute to all 12 of the children, and a brand he was building for the next generation.

Related: This Founder’s Experience As a Platoon Leader in Iraq Inspired Him to Disrupt the Mental Health Care Industry

2. Believe in your vision even when others don’t

“The process of raising money for an early-stage business is hard, because you’re trying to convince people to believe in something that doesn’t exist yet, and to part with their money,” recalls Basir. During the early days of fundraising, the most common critique and feedback he would hear was that the product was too niche and that there was no market for A Dozen Cousins. Who would buy from this brand?

“Americans’ palates have been changing. Ethnic foods are gaining in popularity with all demographics, from Gen Z to Boomers,” says Eugene Fram, a professor emeritus at the Rochester Institute of Technology specializing in retail. Today, the multicultural consumer has a spending power of $3.2 trillion, with Black/African American, Hispanic/Latinx and Asian groups representing 40% of the U.S. population.

Despite what potential investors said, Basir didn’t stray from his vision. “The data has always been obvious to me that Black and Latino consumers are not only a big spending block, but we are also highly influential in terms of how other Americans eat and behave,” says Basir. “At the end of the day, I am part of the community we are serving. I am not here to convince others that the market exists; I spend my time and energy bringing the vision to life.”

Basir notes that over the last year, a number of investors have recognized the importance of the changing demographics of the U.S. and the movement that A Dozen Cousins is building. What’s his response to those who have changed their minds and now want to invest in this space? “I simply say ‘welcome aboard!’”

Related: These Sisters Relied on Side Hustles to Pay the Rent While Bootstrapping Their Food Business: “We Were Pinching Pennies Then Would Walk Into a VC’s Office and Act Like We Didn’t Need Their Money”

3. Build purpose into the DNA of your brand

When Basir launched A Dozen Cousins, the purpose was already part of the brand’s DNA. “I started A Dozen Cousins to create products that would broaden the reach of the natural industry and bring new consumers into the fold. From the beginning I realized that our premium price points (driven by factors like ingredient quality) would still exclude some consumers.”

Basir understood that people living in under-served communities faced many obstacles to living a healthy lifestyle. From tighter food budgets, to lower nutritional education, these communities were at greater risk for diabetes, obesity and other illnesses linked to diet. It was never a question for Basir that he had a responsibility to pay it forward. So as part of its social impact work, A Dozen Cousins provides an annual grant (and volunteer support) to nonprofit organizations such as The Happy Kitchen/La Cocina Alegre and Project Potluck, which are working to eliminate socio-economic health disparities in the U.S.

The impact Basir wants A Dozen Cousins to have on the greater ecosystem is clear. “Our vision is simple,” he says. “It’s for all Americans to live a healthy lifestyle, regardless of who they are, where they live, or how much they make.”

Related: This Founder Is Disrupting How We Consume the World’s Most Popular Beverage