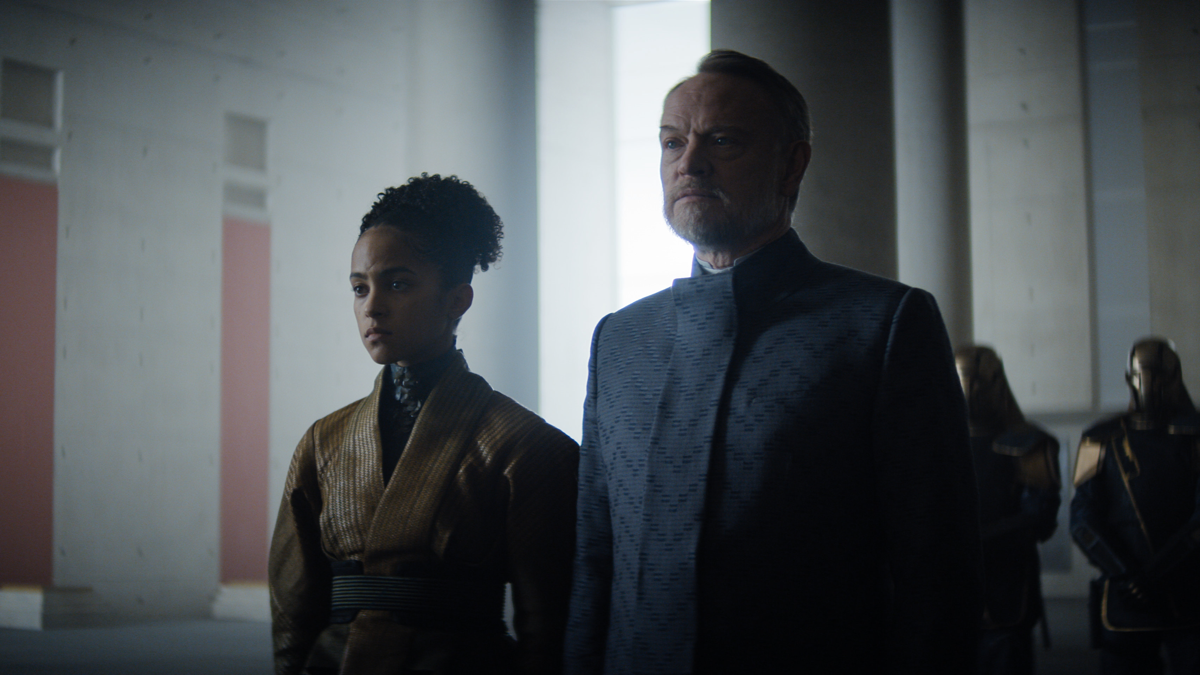 If you’ve ever wondered where all that iPhone money went, just watch Foundation.

First impressions may not be everything, but they do matter. This new Apple TV+ series, a reimaging of an Isaac Asimov classic, makes a pretty simple and straightforward one: Holy cats, this show is expensive. It’s not even just the eye-popping visual effects, though they’re plenty impressive too. Every scene is beautifully staged, lit, and shot. Costumes and props are immaculately designed. This show is polished.

It’s not TV and it’s also not HBO, but Foundation‘s very existence seems to embody the spirit of the reigning cable network’s most memorable and effective marketing slogan. Apple tried to crack it first with a star-studded cast in The Morning Show, which premiered alongside Apple TV+. This new attempt leans more on visual razzle dazzle and an epic scope to set up what turns out to be a riveting story. That should sound familiar to the HBO squad: Foundation is space Game of Thrones.

It’s also very dense at the outset. The first two episodes, which both premiere Friday, Sept. 24, are heavy with introductions and exposition. That’s the overall vibe of the show, it turns out. It’s an unavoidable consequence of showrunners David S. Goyer (Watchmen) and Josh Friedman (the criminally underrated Terminator: The Sarah Connor Chronicles) tackling a story that, across its long arc, spans multiple millennia.

Plenty of characters come and, importantly, go over the course of the first season’s 10 episodes. But the first hours lay some important groundwork, starting with the introduction of Hari Seldon (Jared Harris). A brilliant mathematician, Hari has committed himself to a field of study known as “psychohistory,” which uses numbers and algorithms rooted in the past to predict the future. Those studies have led him to an alarming realization: The Milky Way-spanning galactic empire is soon going to crumble, setting off a period of war and strife that will last tens of thousands of years.

Visual razzle dazzle and an epic scope set up a riveting story: ‘Foundation’ is space ‘Game of Thrones’.

There’s no simple way for Hari to handle this. The galaxy’s rulers are a tribunal of clones — collectively and individually known as “Empire” to their subjects — who are all descended from the original Emperor Cleon I. Brother Dawn is the clone’s youngest self; Brother Dusk (Terrance Mann) is Dawn’s opposite, the oldest and ostensibly the wisest; Brother Day (Lee Pace) sits between them, an authoritative figure who has the final word on most matters.

Empire is none too pleased with Hari’s findings. Their rule depends on absolute stability, and so a prediction of chaos inherently implies a failure of leadership. Even with the findings back up by Gaal Dornick (Lou Llobell), a math whiz from a backwater world who journeys to the galactic capital of Trantor after solving a psychohistory problem even Hari himself couldn’t work out, Empire remains unconvinced.

And so, Hari and Gaal are exiled to the hostile and barely habitable world of Terminus, in the distant Outer Reach, along with a small community of psychohistory true believers. The seeming act of mercy on the part of Empire has darker motivations, but suffice to say: Hari’s offered an opportunity to continue his studies on Terminus, just in case he’s actually right.

I couldn’t even begin to describe where things go next, and I wouldn’t want to. Seriously major characters don’t even enter the picture until the third episode or later. The story is clearly built to stand up as a weekly TV series, with episodes often ending on big, surprising revelations meant to keep viewers dangling on a hook from week to week. But for all the razzle dazzle of the overall production and compelling story beats, Foundation is a slow burn even after it really gets going.

That puts me in the mind of another HBO series: The Wire. Like David Simon’s acclaimed hit, Foundation is building something. The fantastical settings and epic scope make it closer in feel to Thrones, but the need for patience as things develop hews much closer to Simon’s snowballing exploration of crime, culture, and community in Baltimore. There’s a promise inherent in Foundation‘s slow burn: Stick with us and you’ll be rewarded.

That doesn’t make the opening two hours any less disorienting. Foundation is awash with proper names and nouns referring to fictional things, and lots of it gets introduced right up front. This is a show where you’ll benefit from keeping subtitles turned on. You may still struggle to connect with the story early on, but at least you’ll have a clearer idea of what’s going on.

The payoff for your patience and willingness to dive in is a grand adventure through outer space that’s an absolute joy to see in motion. There’s palace intrigue. There’s a seemingly supernatural tech mystery. Unexpected family ties, surprise saves, and deep explorations of character histories. It’s largely a bloodless spectacle, but the “space Game of Thrones” descriptor fits more and more as the season unfolds.

It might come as a shock if you’re an Asimov geek, however. I don’t have the space here, or enough background with the source material, to run through every change. But Goyer and Friedman (and their writing team) take so many liberties. Genders get switched around. Entire planets and plotlines are manufactured. The tribunal of eternally cloned emperors, an increasingly fascinating source of important story beats, wasn’t even a thing in the books.

I can’t speak to which is better, but having watched the entire first season of Foundation I can confidently say I’m a big fan of this take. I hope it gets to play out in full; Goyer has said there’s a Game of Thrones-topping 80 hours in mind. That’s staggeringly ambitious for any modern TV series, and especially one that’s as expensive as this one seems to be, but Apple has seen enough success with TV+ at this point that it at least seems possible.

First impressions mean a lot, and the feeling that stuck with me after the premiere wasn’t terribly promising: “Extremely pretty but hopelessly dry.” But that’s also why I decided to forge ahead. Surely, I reasoned, there was something to justify this show’s existence beyond the visual splendor.

It’s there. You’ll need to have the patience to let that something unfurl, but it’s worth the wait. Much like Hari’s soothsaying math, there’s a deeper purpose at play in Foundation from moment one. This is no mere heavily polished bauble. It’s a true gem, a diamond that is forged to gleaming perfection over the course of 10 episodes. Stick with it, and be dazzled.