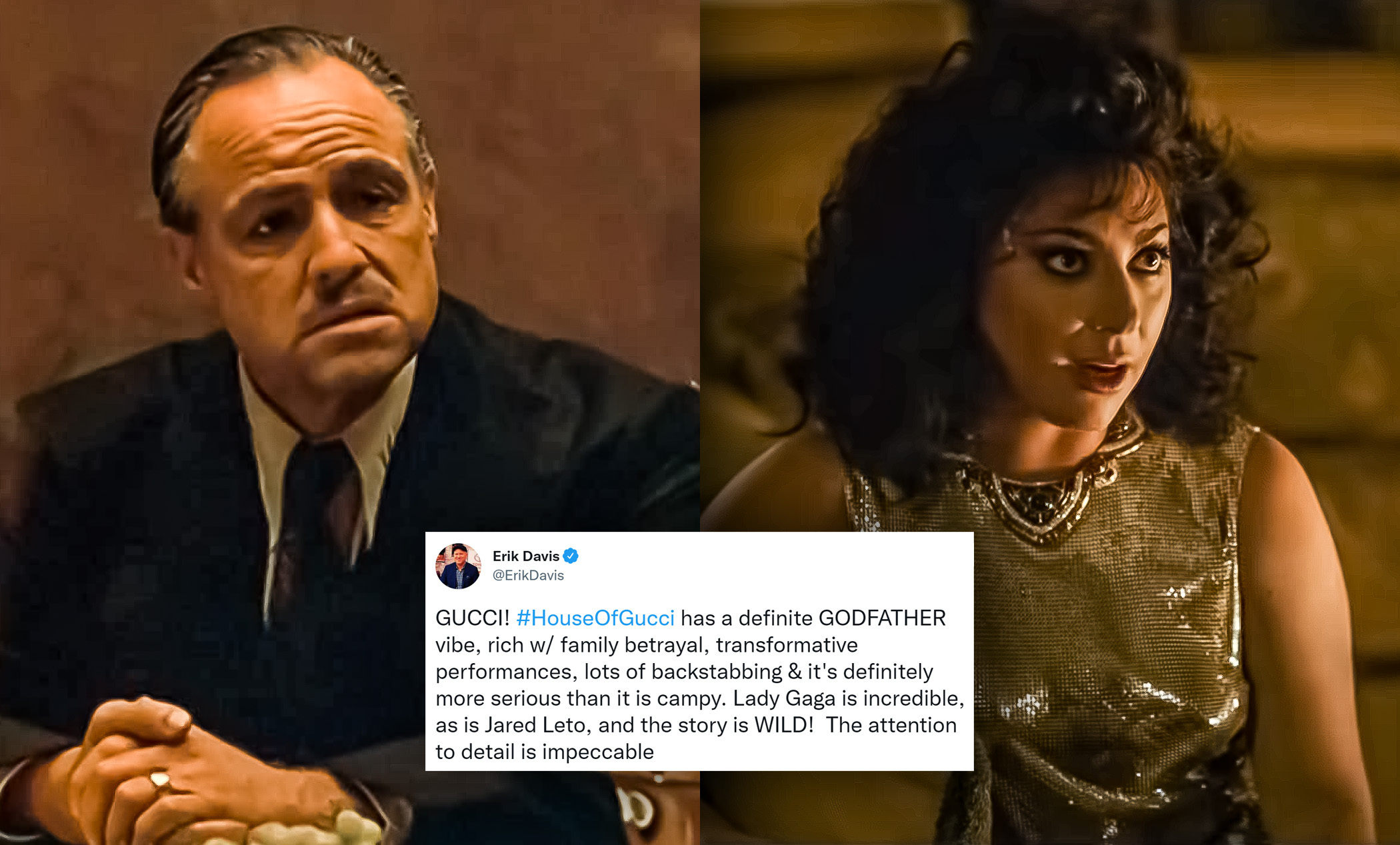 House Of Gucci is undoubtedly one of the most highly-anticipated films of the year and for all the right reasons. Not only does it shed light on the on the assassination of Maurizio Gucci premieres in 1995 but it also features a crackling ensemble cast led by Lady Gaga playing the role of Patrizia Reggiani who was convicted for her role in his murder. And including names like Adam Driver, Al Pacino, Robert De Niro and Jared Leto. The Ridley Scott directorial is based on the 2001 book The House of Gucci: A Sensational Story of Murder, Madness, Glamour, and Greed by Sara Gay Forden and has technically been in development since 2006 where Scott had his eyes on Angelina Jolie and Leonardo DiCaprio as the leads. But the casting turned out for the best and we’re not complaining.

In fact, if the early reviews for the film are in and Lady Gaga is being hailed for her performance. Could this mean another Academy Award after A Star Is Born? Who knows, maybe! One thing is certain though – the film’s overall reception has been mixed. While many critics compare it to The Godfather with words like ‘murderously delicious’ and ‘the real deal’, the rest are not as convinced and have called the film ‘bloated and uneven mess’. An ‘overwrought slog without any discernible direction.’ Yes, the critics are divided and how! See for yourself.

#HouseOfGucci Big & soapy, this really hit the spot for me. Everything Leto & Pacino do is lol ridiculous, yet nicely balanced with Driver & Gaga’s mannered 50s melodrama turns. Ridley Scott has everyone acting in the same movie, while going big with glorious gusto.

#HouseOfGucci is Shakespearean in its execution. A solid story of greed and a hunger for success at any cost is dotted with tragi-comedic interludes – both entertaining in different ways. With solid performances, if campy and overegged at times, it works but could do with a trim. pic.twitter.com/q7EAfqQpm0

#HouseofGucci is delicious and fun. Couldn’t take my eyes off of it. @ladygaga and @JaredLeto are the most delicious of the bunch.

#HouseOfGucci is quite the animal. Campy, everything Ridley Scott wanted “The Counselor” to be but wasn’t able to. Will be divided by many. Lady Gaga eats every morsel of her role up. Instantly the most quotable/meme-able movie since “Borat.” Jared Leto best since his Oscar win. pic.twitter.com/xh8nFrDXmC

.@HouseOfGucciMov is absolutely divine. It is murderously delicious. The cast delivers the best performances of the year. Luxuriate with Adam Driver and Lady Gaga whose chemistry and performances are phenomenal. The film is a masterclass in acting. pic.twitter.com/PGmiZ1q05J

House of Gucci = juicy caviar camp, an absurdly enjoyable Italian soap opera where Bald Jared Leto pisses on a Gucci scarf. It ultimately eases on its gas to a fault, but Lady Gaga’s earnest, ferocious performance completes her evolution from movie star to mighty dramatic actréss

House of Gucci is a bloated & uneven mess that feels like two different movies rolled in one. Every single cast member acts as though they are in a different movie except for Al Pacino, who seems to have understood the assignment and serves as the film’s MVP. #HouseofGucci pic.twitter.com/Y5NvVkNvqI

HOUSE OF GUCCI: Spend your Thanksgiving with this family. Lady Gaga is the real deal – coming for acting nom #2. Adam Driver, Al Pacino, Jared Leto also in the mix. I respect so much about this film, including how it allows almost every character to exist in shades of gray… pic.twitter.com/4oqxsIPIIK

Ridley Scott’s HOUSE OF GUCCI is The Godfather, set in the world of fashion. It’s magnificently tense, and a borderline farcical, but it works so well because the entire cast is EXTRAORDINARY. Leto, Pacino, Gaga, Driver… all incredible. Ridley owns 2021. pic.twitter.com/QhJixhkidb

Lady Gaga plays the best Lady Macbeth I’ve ever seen in a movie in #HouseOfGucci. pic.twitter.com/amx2egQCBK

#HouseofGucci is a crowdpleaser that critics will not support. At the Academy Museum screening last week, SAG actors showed support for the film’s most egregious scene-chewers, Lady Gaga and Jared Leto, who may squeak into SAG or Oscar race, but could have used the Golden Globes.

HOUSE OF GUCCI is not a good movie but it is a good time?

Now that the HOUSE OF GUCCI social embargo has lifted, I can finally say that Lady Gaga is in the movie playing an Italian person.

GUCCI! #HouseOfGucci has a definite GODFATHER vibe, rich w/ family betrayal, transformative performances, lots of backstabbing & it’s definitely more serious than it is campy. Lady Gaga is incredible, as is Jared Leto, and the story is WILD! The attention to detail is impeccable pic.twitter.com/BphR07VLP5

Meanwhile, the buzz among fans is still at an all-time high and a lot of it has to do with Gaga and her promise of method acting. The pop star-turned-actress told British Vogue earlier this month, “It is three years since I started working on it, and I will be fully honest and transparent: I lived as her (Reggiani) for a year and a half. And I spoke with an accent for nine months of that. Off camera, (too). I never broke. I stayed with her.” What’s not to love and look forward to?

House of Gucci is scheduled for a theatrical release on November 24.