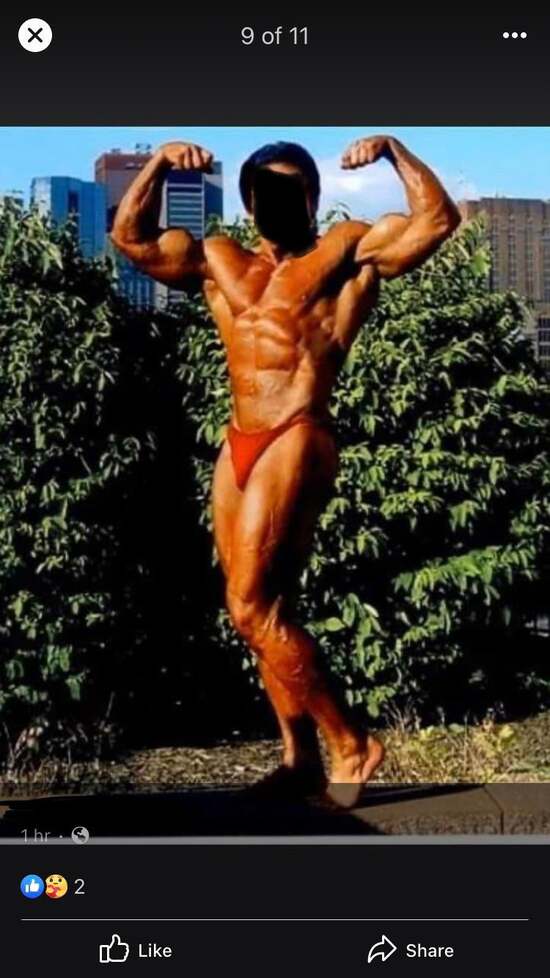 Muscles was a bodybuilder, personal trainer, fitness buff. He was also clearly on anabolic steroids, which will come into play soon.

Big guy, young, seemingly healthy. But that’s not a natural physique, and that’ll have consequences.

At least 49 people thought being an anti-mask asshole was laudable and hilarious.

Ah, yes, we’ve seen this quite a few times the past week: promises of mass walk-offs failing to materialize.

Despite claims by the Massachusetts State Police union that “dozens of troopers” have submitted their resignations due to a COVID-19 vaccine requirement, a State Police spokesman only one trooper has definitively said he will retire because of the mandate. https://t.co/X7vUs41MJc

We’ve seen the same in hospital systems, where vaccination compliance is in the 99% range.

But Muscles here knows all the nurses in some hospital, personally, all ready to walk away. Sure he does.

Jesse Jackson was in the hospital, doing occupational and physical therapy, as COVID-19 exacerbated his existing Parkinson’s. At 79, and with that massive pre-existing condition, does anyone really wonder what would’ve happened had he not been vaccinated? Instead, he got to go home a few weeks later.

Does anyone really think he knows “many people” paralyzed by the COVID-19 vaccine shots? Of course not. He’s seen these unsubstantiated claims on Facebook and right-wing media outlets and accepts those claims as valid. So, sure. Some quack “doctor,” like the many we’ve seen in this theory, claims to hold “medical patents,” and that’s all the validation and sourcing necessary.

Now for someone who clearly shoots up anabolic steroids, why the fear of “14 shots”? We get annual flu shots. So what? If we need to boost against COVID every six to 12 months, here I come! Jab me however many times you need!

Meanwhile, Muscles claims to be “taking care of his immune system.” Turns out steroid use is both immunosuppressive and also potentially heart-damaging. So, weaker immune system, weaker heart. We’ve seen several times how COVID-19 attacks the heart.

And, oh, anabolic steroids fuck with a user’s lungs.

He thinks murder is funny. And 33 of his pals laughed along with him.

You most certainly have to do some paperwork to vote. It’s called “registering to vote.” Poll workers verify that you’re registered to vote at the polls. If you vote by mail, election officials verify your signature with the one they have on file. There are definitely papers involved.

South Carolina Gov. Henry McMaster can afford to kill his supporters for political gain. His state is still a 10%+ Republican state. It gives him a macabre advantage over Florida’s Ron DeSantis and Texas’ Greg Abbott, both of which face the voters next year in closely divided states.

Not that electoral math is stopping either DeSantis or Abbott from continuing to willfully kill their own supporters.

I guess his gym fired him for putting everyone at risk?

So we already know that given his steroid use, he hasn’t always “taken care of his immune system.” But even taking that out of the equation, immune systems aren’t something you can control. Take a peanut allergy—is that the result of someone not taking care of their immune system? Why are some people more susceptible to rheumatoid arthritis or lupus?

It’s true, we can damage our immune system by abusing alcohol, poor dietary choices, obesity, smoking, being around a polluted environment, taking anabolic steroids, etc. It’s not all out of our control. But there are key genetic factors over which we have no control. The healthiest person can be felled by a disease that has zero impact on an obese smoker.

Muscles by all indications was a very healthy individual, an athlete. Doctors took a look at him and (presumably) said, “Young and healthy, this one should make it!” And yet …

A simple free jab could’ve avoided all of this. His own friends were trying to set him straight. He was blindsided by both his ideology and by his reflection on a mirror. He was healthy! No pre-existing conditions! He “took care” of his immune system!

COVID didn’t care. And by all looks of it, COVID-19 didn’t even need to work hard for this one. All it took was two or three days after being moved to the ICU. Brutal.

Meanwhile, South Carolina Gov. McMaster has one less loyal supporter, not that he cares.