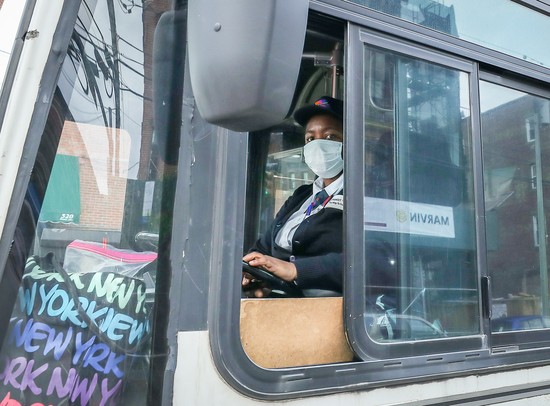 “The need for the transit union, for representation, is long overdue. A lot of guys feel that they are underpaid,” says Ray. “Living in Charlottesville is difficult with the housing and everything. Most of our operators don’t live in Charlottesville.”

Mary Pettis, a 35-year-old Black bus driver for Charlottesville Area Transit, says she can no longer afford to live in Charlottesville, where wages start at only $16 an hour and top out at $22 an hour.

In general, local government workers’ weekly earnings are 14.1% lower than that of similar private sector workers, but the gap is much larger for public sector workers who have no or weak bargaining rights.

“I personally had to move from Charlottesville to Waynesboro [30 minutes away] because I couldn’t afford to live in Charlottesville,” says Pettis. “I have three jobs because I couldn’t make enough money driving the bus, and I am a single parent. And I am not the only driver who has had to do these things—so I feel like a union would speak for us and give us a voice.”

For decades, many bus drivers and other public employees in southern states like Virginia have been denied the right to collective bargaining. They have endured wages and working conditions that are dramatically worse than elsewhere in the country.

It’s also laying bare the stark divide between unionized and nonunionized municipal employees. In general, local government workers’ weekly earnings are 14.1% lower than that of similar private sector workers, but the gap is much larger for public sector workers who have no or weak bargaining rights, especially in Virginia (29% gap), according to a recent report by the Economic Policy Institute.

In Alexandria, bus drivers won a union contract this year that saw some workers get as much as $12-an-hour raises.

“Because of this union contract, more of these workers will actually be able to live in the community that they serve,” says Raymond Jackson, Amalgamated Transit Union (ATU) Local 689 president and business agent.

“It’s a very special moment right now for organizing. The pandemic has really laid bare the ugliness of this industry.“

Union leaders like Jackson say they are seeing new momentum for organizing following the pandemic. In places like Savannah, Birmingham, and DeKalb County, Georgia, bus drivers have gone on wildcat, sometimes illegal strikes that improve their working conditions.

“It’s a very special moment right now for organizing. The pandemic has really laid bare the ugliness of this industry,” says John Ertl, trustee of ATU Local 1764 in Washington, D.C. “We have organized bus drivers that are literally homeless and sleeping out of their cars and people want change now.”

Ertl points to the safety record of unionized bus lines versus nonunion businesses during the pandemic. Unionized bus lines have been able to secure personal protective equipment, COVID-19 safety protocols, and paid sick leave so that bus drivers didn’t have to come in when sick.

The threat of privatization

However, while unions are making progress in the South in securing collective bargaining rights for bus drivers, many recently organized bus drivers across the country face a new threat: privatization. In many states, the ATU has organized drivers only to see their work outsourced to private contractors who don’t recognize the union.

“You know we negotiate a contract and then the contract is sold to a [private contractor], who didn’t sign the contract and the first thing they come in and do is fight the contract and want to take things away,” says ATU President John Costa. “These private bus companies tell governments that they can save money, but at the end of the day, where is that savings coming from? And it comes off the workers.”

“It’s very much easier for private contractors to union bust because they’re not democratically accountable,” says Donald Cohen, founder of In the Public Interest and co-author of the new book The Privatization of Everything.

While unions are making progress in the South in securing collective bargaining rights for bus drivers, many recently organized bus drivers across the country face a new threat: privatization.

This week in Reno, Nevada, bus drivers are celebrating a major victory in a strike against a private bus contractor as they reach a tentative agreement. After first walking off the job in August for 10 days against the contractor, Keolis, over attempts to cut their long-standing union contract, drivers went on strike for another 25 days beginning in late September.

The August strike helped Reno bus drivers, members of Teamsters Local 533, defeat the company’s proposal to take away union-provided health care and force workers to opt in to an inferior plan. Keolis attempted to do away with a seniority bidding system that gave workers the freedom to choose when they worked, making lives difficult for many bus drivers in Reno.

“Keolis hasn’t changed its stripes and is still doing everything in its power to take rights away from your city bus drivers,” said Teamsters Local 533 President Gary Watson. “They have bid routes so poorly that drivers have to choose if they go to the bathroom or keep the route on time. Working [parents] under their bid system will not be able to get off and take care of their children.”

Keolis did not respond to a request for comment from Capital & Main. However, Keolis previously denied that its bidding system harmed its workers. Instead, Keolis took to the press repeatedly to accuse the union of lying and claim it wasn’t bargaining in good faith.

The Teamsters dug in and mobilized public support behind a campaign to get the local transit agency, the Regional Transportation Commission of Washoe County, to drop Keolis as a contractor. Teamsters Local 533 convinced nearby South Lake Tahoe to do away with using private transit contractors in 2017.

After 35 days of striking, the drivers won a major achievement this week when they reached a tentative agreement on scheduling, time off, and other issues. They celebrated the tentative agreement as a victory reflecting the union’s ability to mobilize the public behind it.

“Working class people need to know: It’s time for us to unite. Not only unite individually into unions, but unite as a whole to beat down this corporate attitude that they can just walk all over everybody.”

“Working class people need to know: It’s time for us to unite,” said Reno bus driver and Teamsters Local 533 Shop Steward Michael Lansborough. “Not only unite individually into unions, but unite as a whole to beat down this corporate attitude that they can just walk all over everybody.”

On Martha’s Vineyard off Cape Cod, Massachusetts, much like in Charlottesville, bus drivers couldn’t afford to live in the wealthy community on their wages. They won a historic first contract following a five-year battle with Florida-based contractor Transit Connection Inc. that ended with 28-day strikes that brought sightseeing almost to a halt in the tourist mecca in the summer of 2019.

The contract also doubled pay for drivers on holidays, when tourism booms on the island. In addition, the contract included strong language reassuring workers that their jobs wouldn’t be outsourced in the future.

Given the role of public transit on Martha’s Vineyard, drivers say that they found allies even among some of the wealthiest people in the United States.

“We wouldn’t have won if it wasn’t for the solidarity of our neighbors and other allies, who rely on and support us year-round,” said bus driver Richard Townes.