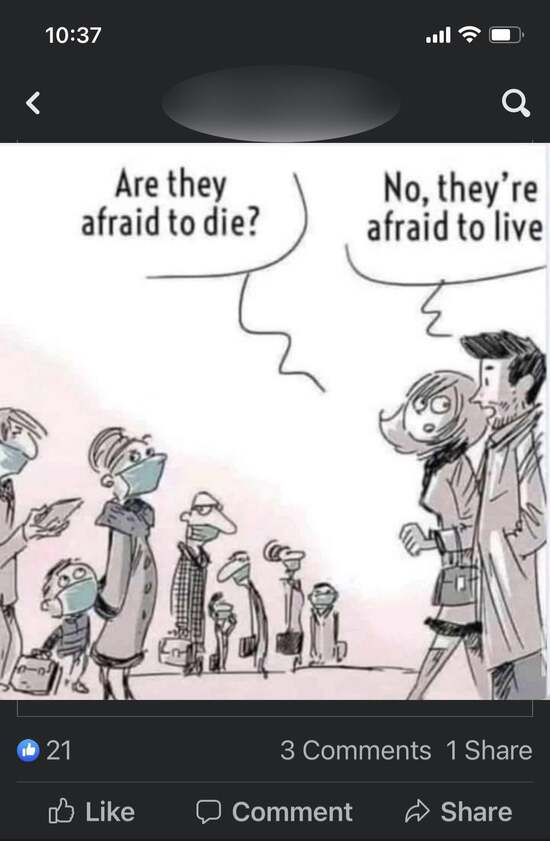 Being conservative means being afraid of imaginary dangers like “immigrant caravans,” “cancel culture,” and “critical race theory,” while being too macho and stupid to be afraid of things like “global pandemic that has killed millions.”

Stupid joke, sure, but if that was a real thing, you can believe he wouldn’t catch COVID and suffer a painful illness, lasting health effects, financial ruin, and/or death.

Fauci needs to be fired because of deflationary pressures on lap dances?

Is he, uh, advocating for a livable wage for sex workers?

1) As an English-as-a-second-language person, I never understood this “the birds and the bees” metaphor. I mean, implied interspecies sex is weirder than anything a species might do within its own group.

2) As long as it’s consensual, the birds and the bees can do whatever they want.

3) “Love is love” isn’t that hard to explain. Harder to explain: it has to be this ONLY way, because the Bible.

Karl Marx was a Satanist. Got it!

1) Something doesn’t affect me, therefore it doesn’t matter: conservatism in a nutshell.

2) Ozone layer depletion was stopped by science and public policy, including banning chlorofluorocarbons as aerosol propellents.

4) Al Gore didn’t predict an ice age. It was the opposite.

Mark Zuckerberg, please stop messing with this guy’s Facebook privacy settings. How else is he going to brag to everyone that he has COVID?

He has COVID and he’s going out in public, dear god.

Good thing that hydroxychloroquine cured him, though, until it didn’t.

He only has a 1% chance of dying, well, except that he’s older, but “barely” inside the lower-risk group. And oh yeah, there’s that small, practically insignificant heart disease, but nothing to worry about because it’s truly just a “small touch.”

In reality, once hospitalized, death rates are scary high. Check out this new study:

Thats … terrifying. But even if it was only 1% chance of dying, that’s one in every hundred people! What makes people think that those are odds worth playing with, when losing means death?

Then layer on the mental gymnastics necessary for Billy to convince himself his odds were even that low: he’s older, but not as old as the highest-risk group. And sure, he had heart disease, but only a “small touch” of it.

Anyway, he got COVID out of his own irresponsible stupidity, so why didn’t Trump bomb China?

“Now we’ll see if I was right or wrong.”

The verdict has been rendered.

I keep saying this: No one within one degree of separation of me has died of COVID. My SF Bay Area bubble took this pandemic seriously before anyone else, and we’ve been mostly healthy and safe here. My friends and family elsewhere also took this disease seriously from the start, in large part because of Mark Sumner’s writing here. He put the fear of COVID in me way back in January 2020, and I shared freely.

That’s all to say, this has been a pandemic I’ve seen affect others from afar, and that is a small blessing amidst all this pain and suffering. But these people, they are seeing COVID decimate their friends, family, and communities. “Taking all the great ones.” It didn’t have to be that way! Masking, social distancing, vaccinating. Sure, that stuff can be obnoxious and no one wants to do it, but those that have are living, and those that aren’t, are dying.

Look at that first meme again. We’re not afraid of living. We’re afraid that one stupid infection means we’re connected to all manners of tubes and wires. We’re afraid of painful illness, financial damage, long-term effects, or even death. Those are valid fears. I’m afraid of everything that kills a lot of people because quite frankly, I’m not done living. I like living! It’s kinda amazing. I’d rather keep doing it!

And if the price of living in this age of COVID is wearing a mask in public and avoiding crowds, then yes, sign me up. I’m right there. And as a result, here I am writing this post, while Billy is dead and his whole community is claiming “it’s not fair!”

They certainly didn’t care about “fair” when it was a disease hitting liberal cities and communities of color. They care now that it’s killing them. But we adjusted rapidly to stop the carnage—masking, shutting down businesses, banning all gatherings, and vaccinating when the jab became available. We wanted the carnage in our communities to stop.

That’s why it’s endlessly baffling to me why they, now that they’re personally affected, aren’t doing anything to stop the rising death toll in their own communities.