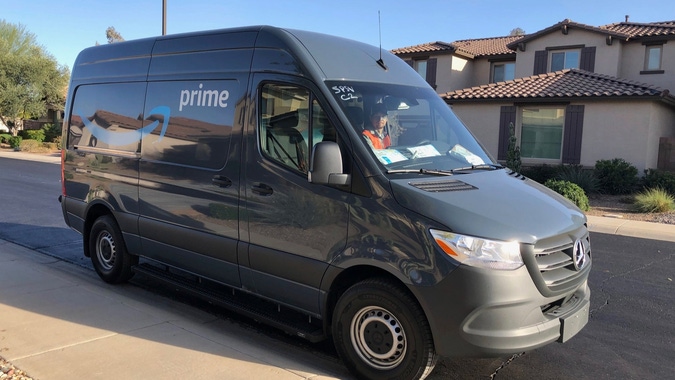 Amazon delivery people are unhappy with the Artificial Intelligence (AI) cameras installed in the company’s trucks. Although the intention was to ensure the safety of its drivers, it now penalizes them for totally normal actions such as looking at the side mirrors or adjusting the radio . They are also punished for events that are beyond their control, such as when another car passes or passes them .

“It’s annoying, when I didn’t do anything (bad) ,” a Los Angeles delivery driver told Vice . “Every time I need to turn right, it inevitably happens. A car cuts me into my lane, and the camera yells at me, in this really dystopian dark robotic voice . “

The role of the AI cameras in Amazon vans is to detect possible ‘events’ of unsafe driving . This influences the performance scores of workers, who receive ratings of ‘poor’, ‘fair’, ‘good’ or ‘fantastic’.

The company takes these scores into account to award bonuses , additional payments and prizes . For DSPs, ‘unfair’ penalties affect their income by making it difficult for them to earn bonuses for repairs, damages and others, but only if their drivers’ combined weekly scores hit the ‘fantastic’ level.

“Amazon uses these cameras supposedly to make sure they have a more secure workforce, but they are actually using them to avoid paying delivery companies ,” the owner of a Washington DSP told Vice.

Amazon defends the effectiveness of its smart cameras

Last February, Amazon announced that it would install the cameras on its delivery vans to improve safety. The system includes a front camera, two side cameras and another that looks at the driver.

“One of the security enhancements we made this year is the implementation of telematics and camera-based security technology across our entire delivery fleet ,” Amazon said in a statement quoted by Business Insider . “This technology provides drivers with real-time alerts to help them stay safe when on the road .”

The move raised privacy and surveillance concerns , and an Amazon driver even resigned over the installation of the new cameras. “It was both a violation of privacy and a breach of trust ,” the former employee told Reuters.

#Amazon banned 3,000 seller accounts and 600 brands from China. They promised gift cards or items in exchange for good reviews. https://t.co/AbwfssHK7k

However, Amazon says they have seen a reduction in accidents and other safety violations since implementing the AI system in their delivery vehicles.

The company claims that since they installed the cameras in more than half of their US fleet they have had 48% fewer accidents . Additionally, violations decreased 77% , driving without a seatbelt decreased 60%, and distracted driving decreased 75% .

Although some delivery providers say they are not trained to use the cameras, Amazon claims that each delivery company received training to use them and that they are required to inform their workers how ‘events’ affect their scores.

Some Amazon drivers have resorted to covering the cameras of their trucks with stickers to avoid unnecessary violations.

“If we raised the problems with the cameras, the managers would hide it under the table, they are only worried about getting the packages out. So we covered them, “ said a delivery man to the same medium.

Other delivery drivers choose to wear dark glasses so that the cameras don’t interpret their eye movements as ‘distracted driving’.

“The Netradyne cameras that Amazon installed in our trucks have been nothing more than a nightmare,” said a former Amazon driver in Alabama. “Personally, I didn’t feel safer with a camera watching my every move .”

The couriers also said that wrongly flagged events are difficult to appeal to the company, and that when they do try they are often ignored. Nonetheless, Amazon told Insider that the appeals were reviewed manually and that the ‘errors’ did not affect non-vendor couriers.